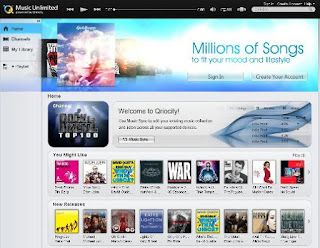 Higher quality audio is a staple of the experience for a growing number of streaming music services, most notably Spotify. Sony won't let itself become the exception to the rule: Music Unlimited now has an option for a much more detailed 320Kbps bitrate. The quality upgrade is staggered and is initially active on Android devices, the PlayStation 3 and the web player, while desktops, iOS, the PlayStation Vita and home theater gear will get improved tunes later on in the year. Music Unlimited won't appease those who want a consistent experience in the near term, then -- still, it might be enough for listeners whose Xperia serves as a primary jukebox .

320kbps AAC Streaming Playback Now Available for PlayStation 3, Android Smartphones and Tablets, and PCs
FOSTER CITY, Calif., Jan. 30, 2013 -- Sony Network Entertainment International today announced that the company's Music Unlimited service now offers users the ability to listen to high quality audio through the service's PC (Windows(R) and Mac OS(R)), Sony Xperia(TM) and other Android(TM) smartphones and tablets, Sony Android Walkman(R), and PlayStation(R)3 (PS3(TM)) computer entertainment system applications. By turning on the high quality streaming option in Music Unlimited's settings menu, songs will playback in pristine 320 kbps AAC high fidelity audio.
Sony Entertainment Network's Music Unlimited service is a cloud-based digital music service that hosts a global catalog of over 18 million licensed songs(1) and is available on a wide range of Sony and non-Sony connected devices including any personal computer (including Windows and Mac OS), iOS devices including iPhone(R) and iPod touch(R), Android devices including Sony Xperia smartphones and tablets, as well as the PS3, PlayStation(R)Vita, and connected Sony BRAVIA HDTVs as well as various Sony home audio and video devices.
The new feature, which is now live on the PS3, Android smartphone and tablet, Android Walkman, and web apps, will be added to other devices compatible with the Music Unlimited service later this year.