3-D Printed Car Is as Strong as Steel, Half the Weight, and Nearing Production 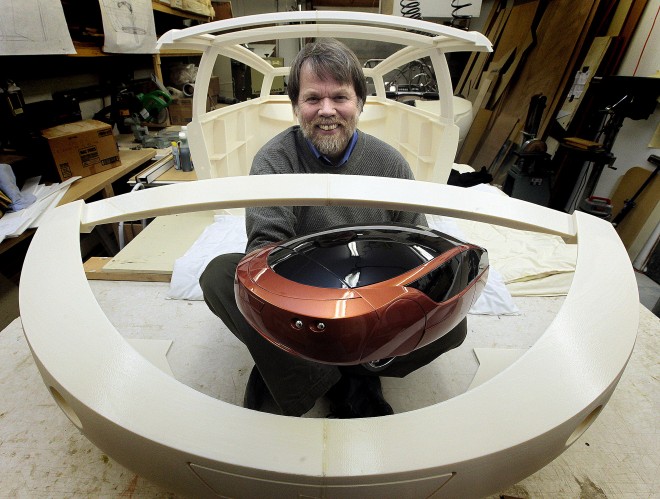 Picture an assembly line not that isn’t made up of robotic arms spewing sparks to weld heavy steel, but a warehouse of plastic-spraying printers producing light, cheap and highly efficient automobiles. If Jim Kor’s dream is realized, that’s exactly how the next generation of urban runabouts will be produced. His creation is called the Urbee 2 and it could revolutionize parts manufacturing while creating a cottage industry of small-batch automakers intent on challenging the status quo. Urbee’s approach to maximum miles per gallon starts with lightweight construction – something that 3-D printing is particularly well suited for. The designers were able to focus more on the optimal automobile physics, rather than working to install a hyper efficient motor in a heavy steel-body automobile. As the Urbee shows, making a car with this technology has a slew of beneficial side effects. Jim Kor is the engineering brains behind the Urbee. He’s designed tractors, buses, even commercial swimming pools. Between teaching classes, he heads Kor Ecologic, the firm responsible for the 3-D printed creation.
“We thought long and hard about doing a second one,” he says of the Urbee. “It’s been the right move.”
Kor and his team built the three-wheel, two-passenger vehicle at RedEye, an on-demand 3-D printing facility. The printers he uses create ABS plastic via Fused Deposition Modeling (FDM). The printer sprays molten polymer to build the chassis layer by microscopic layer until it arrives at the complete object. The machines are so automated that the building process they perform is known as “lights out” construction, meaning Kor uploads the design for a bumper, walk away, shut off the lights and leaves. A few hundred hours later, he’s got a bumper. The whole car – which is about 10 feet long – takes about 2,500 hours.

Besides easy reproduction, making the car body via FDM affords Kor the precise control that would be impossible with sheet metal. When he builds the aforementioned bumper, the printer can add thickness and rigidity to specific sections. When applied to the right spots, this makes for a fender that’s as resilient as the one on your Prius, but much lighter. That translates to less weight to push, and a lighter car means more miles per gallon. And the current model has a curb weight of just 1,200 pounds. To further remedy the issues caused by modern car-construction techniques, Kor used the design freedom of 3-D printing to combine a typical car’s multitude of parts into simple unibody shapes. For example, when he prints the car’s dashboard, he’ll make it with the ducts already attached without the need for joints and connecting parts. What would be dozens of pieces of plastic and metal end up being one piece of 3-D printed plastic. “The thesis we’re following is to take small parts from a big car and make them single large pieces,” Kor says. By using one piece instead of many, the car loses weight and gets reduced rolling resistance, and with fewer spaces between parts, the Urbee ends up being exceptionally aerodynamic.” How aerodynamic? The Urbee 2′s teardrop shape gives it just a 0.15 coefficient of drag. Not all of the Urbee is printed plastic — the engine and base chassis will be metal, naturally. They’re still figuring out exactly who will make the hybrid engine, but the prototype will produce a maximum of 10 horsepower. Most of the driving – from zero to 40 mph – will be done by the 36-volt electric motor. When it gets up to highway speeds, the engine will tap the fuel tank to power a diesel engine.But how safe is a 50-piece plastic body on a highway?
With three wheels and a curb weight of less than 1,200 pounds, it’s more motorcycle than passenger car.
“We’re calling it race car safety,” Kor says. “We want the car to pass the tech inspection required at Le Mans.” The design puts a tubular metal cage around the driver, “like a NASCAR roll cage,” Kor claims. And he also mentioned the possibility of printed shock-absorbing parts between the printed exterior and the chassis. Going by Le Mans standards also means turn signals, high-beam headlights, and all the little details that make a production car.
To negotiate the inevitable obstacles presented by a potentially incredulous NHSTA and DOT, the answer is easy. “In many states and many countries, Urbee will be technically registered as a motorcycle,” Kor says. It makes sense. With three wheels and a curb weight of less than 1,200 pounds, it’s more motorcycle than passenger car. No matter what, the bumpers will be just as strong as their sheet-metal equivalents. “We’re planning on making a matrix that will be stronger than FDM,” says Kor. He admits that yes, “There is a danger in breaking one piece and have to recreate the whole thing.” The safety decisions that’ll determine the car’s construction lie ahead. Kor and his team have been tweaking the safety by using crash simulation software, but the full spectrum of testing will have to wait for an influx of investment cash. “Our goal with the final production Urbee,” Kor says, “is to exceed most, if not all, current automotive safety standards.” Kor already has 14 orders, mostly from people who worked on the design with him. The original Urbee prototype was estimated to cost around $50,000.
When the funding comes in, the head engineer is planning to take the latest prototype from San Francisco to New York on 10 gallons of gas, preferably pure ethanol. The hope is that the drive will draw even more interest. “We’re trying to prove without dispute that we did this drive with existing traffic,” Kor says. “We’re hoping to make it in Google [Maps'] time, and we want to have the Guinness book of world records involved.”