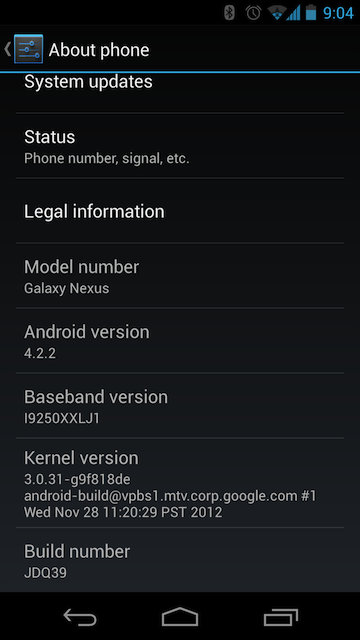 If you're an Android user and you like minor, bug-fixing software updates, you don't have to be jealous of the iPhone 4S and iOS 6.1.1 anymore: Android 4.2.2 is here, and true to form Google is beginning to roll it out to its Nexus devices first.
Reddit user WeeManFoo appears to have been one of the first to notice the update's availability on the (non-Verizon) Galaxy Nexus, and it also appears to be trickling out to some Nexus 7 and Nexus 10 tablet users. There's no word, on Reddit or otherwise, about the Nexus 4 just yet, though it's almost certainly just a matter of time.
The first update since Android 4.2.1 in late November, Android 4.2.2 appears to contain only minor fixes befitting the small version bump. Primarily, it helps to resolve an issue where audio streamed over Bluetooth would "skip" or hiccup. WeeManFoo reports that Bluetooth streaming "works better [compared to 4.2.1] but it's not perfect" and that his Galaxy Nexus still disconnected from the Bluetooth speaker in his car when switching from Wi-Fi to a 3G data connection, indicating that there's still some work to be done. Whether the update brings other notable fixes or features to Android 4.2 will have to wait for an official changelog.
As usual, Google appears to be rolling Android 4.2.2 out in stages, so if your Nexus device hasn't received an update yet you should probably get it at some point in the next few days. As of this writing, our Galaxy Nexus, Nexus 4, Nexus 7, and Nexus 10 are still waiting for their updates.