Flexible displays are the Future of IT Industry! 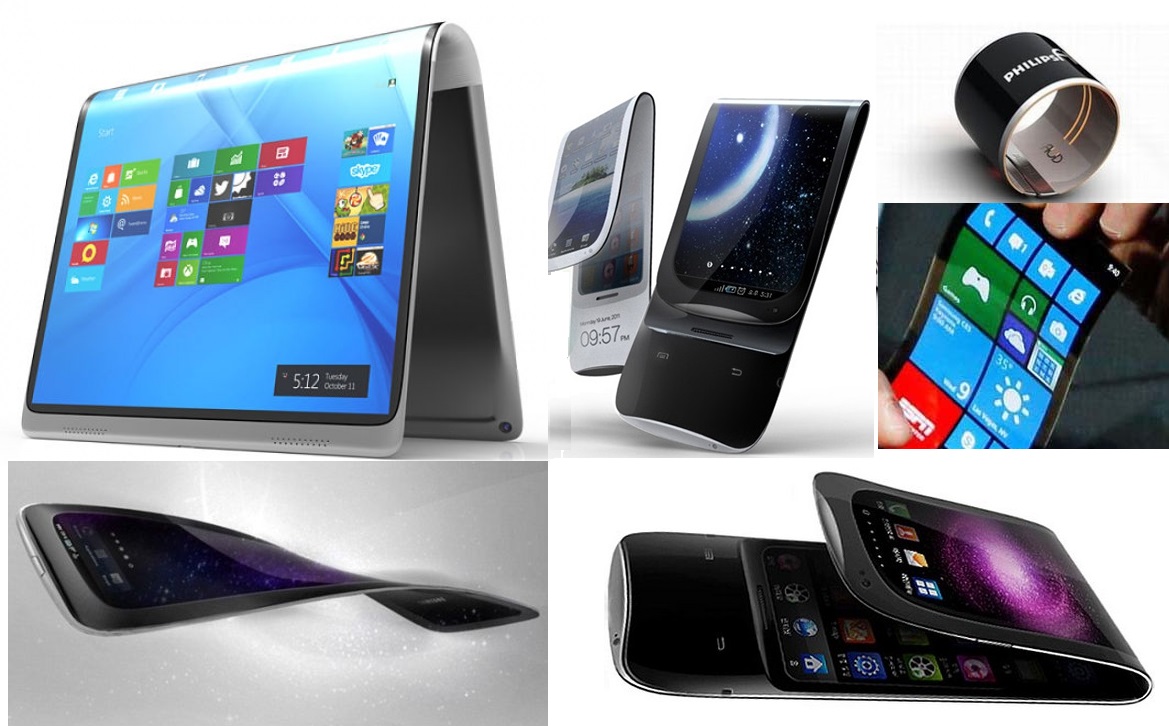 Apart from 4k and smart home appliances, the CES 2013 saw a lot of attention being drawn towards bendable, flexible displays. The elasticised display idea isn’t something new as we have seen hoards of device concepts being crafted around flexible, bendable and even foldable displays. These concept devices give us a futuristic feel, be it a flexible phone to be worn around the wrist or a phone that opens up to turn into a tablet or PSP-like device. But how far is this future? Nokia has been toying with the idea ever since we remember. The technology sounds very fascinating and the possibilities and the extent to which bendable displays could be used are vast and leave us spellbound. However, these have always been concepts and we haven’t seen any device materialise in the real world. There have been several technologies that were conceived in these years and all have been put to their practical use. But the bendable display was always a concept being showcased time and again and shown in the form of a morphed, photoshoped device that just tell us this is the future, but we don’t know when it will turn into a reality. The question remained – will we get a powerful device featuring the latest next-gen processors and other essential hardcore components?

Is the future here?
Samsung has taken the official plunge into bendable displays and rekindled the buzz. At CES this year, Samsung showed off its flexible OLED display branded Youm. The Youm display line is made of extremely thin plastic rather than glass. The use of plastic makes the whole difference and makes the display bendable and almost unbreakable. The Samsung spokesperson even demoed the versatility of the technology by bending and wriggling the display.

The video clearly shows how the display can be used as a foldable phone that turns into a tablet (something we have seen before) or a slide-out display (just like our favourite One Pen concept, again seen before). Samsung showed a slab of display – wriggled it, twisted, bended and even folded it – but when it came to demoing a practical device, its nameless phone prototype was barely even a phone. The Verge, who got a hands-on with the device said, “the prototype isn't truly a phone — it lacks a radio, operating system, camera, and most any other feature you'd find in a phone. Instead, in its current form, the prototype is more like a touch-capable digital picture frame that uses a low-power processor to cycle through images of a mocked-up UI. The phone certainly feels like a prototype: it's poorly made of plastic, and it felt completely hollow within. We're skeptical of the utility of a flexible display on a phone, but it certainly makes for a cool tech demo."

Soon after Samsung showed off Youm, the Internet has been abuzz with rumours and speculations claiming that the Galaxy S4 will be coming with a flexible display. But if you’ve patiently watched the Samsung keynote, then you’ll know that Brian Berkeley, Senior VP, Samsung's San Jose Display Lab, was addressing manufacturers rather than consumers while demonstrating Youm and its possibilities. This makes it clear that one shouldn’t expect superior, functional tablets and phones to hit store shelves anytime this year.

Potential uses
Don’t get us wrong, we would love to own a device that wriggles, bends, folds or unfolds to morph from a tablet to a phone or even transforms into a wrist band, but there's a lot more to a phone than just the display. We do hope one of these companies comes up with something that does make our jaws drop, very soon. However, we think the bendable or flexible displays could be more beneficial in public places like hotels or malls. Adding some gesture based controls and touch abilities could make them a great interactive device that can wrap around a pillar at an airport, giving people information no matter which side of the pillar they stand. As we said, the possibilities can be umpteen, but implementing them into real world isn’t that easy and the reason is we clearly lack resources to work around a flexible phone or tablet market.

Building a flexible ecosystem
Currently, there are no resources to build powerful devices that can be twisted and turned or even crumpled or creased. The limitation comes due to the lack of inner components to support such a device. For instance, if you want a flexible phone, you will also need flexible components like processors and memory and batteries. A new report says that there has been a breakthrough with the bendable battery tech and scientists have invented material to built flexible lithium-ion batteries, which can be eventually used to build bendable electronic products. However, it is believed that this technology is at least a few years away from any form of commercial exploitation.

Samsung showed us possibly the first proof of concept of what a flexible-bendable device could be like. But a full-fledged device is clearly a few years away. Until then we'll treat all such demonstrations with measured awe. Now, where are those glasses that Sergey Brin was seen wearing in the New York subway earlier this week?