HTC One hands on: a powerful phone 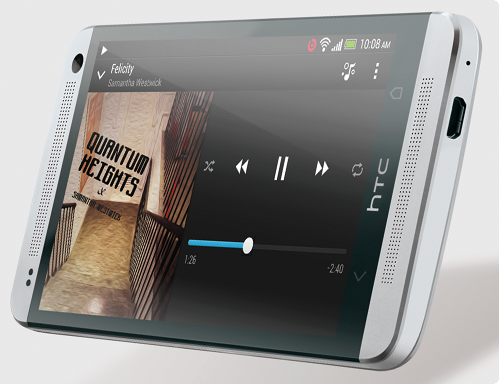 HTC announced its next flagship Android phone, the HTC One, at a press event Tuesday in New York City. The company placed heavy emphasis on the phone’s new UI overlay, "Android with HTC Sense", on top of Android 4.1.2 Jelly Bean, as well as its BlinkFeed information service and a new ultrapixel camera. HTC seems set on making the phone do a lot of the work for the user, which should be helpful to casual customers but might frustrate others who prefer more control.
The screen on the HTC One is bright and very crisp, and we’re very glad to see more and more manufacturers step up to a 1080p resolution (468 pixels per inch). We’re still finding, as with HTC’s last big launch with the Droid DNA, that this feature and svelte body design end up coming at the cost of battery life and size. But the new HTC One packs a 2300 mAh battery, where the Droid DNA’s was only 2020 mAh, so it may have less trouble with running out of juice mid-day.
The HTC One aluminum body feels nice to hold, with a back that curves into tapered edges on all sides. The headphone jack resides on the top of the phone, with a micro-USB port offset to one side on the bottom edge.

One of the big features of the HTC One is its camera, which HTC bills as an “ultrapixel model,” so named because the sensor is able to capture 300 percent more light than normal smartphones. According to the HTC’s spec breakdown, the camera has an f2.0 aperture, 28mm lens, a pixel size of 2.0 micrometers, and a 1/3” sensor format. For comparison, the iPhone 5 has an f2.4 aperture, 1.4-micrometer pixel size, and 1/3.2” sensor format.
But while the iPhone 5 and most contemporary Android smartphones have 8-megapixel cameras, the HTC One’s ultrapixel model is 4 megapixels. HTC wants to transcend the megapixel rat race with better-quality, more capable pixels, but if the only more capable dimension is its ability to capture more light (presumably more quickly), we aren’t sure that alone will facilitate a better camera.
We tried out the camera quickly in single-shot mode, aimed at a couple of low-light scenarios, and then tried the same shots with an iPhone 4S in HDR mode. The HTC One’s photos seemed to have an unnatural glow to them and did not seem particularly crisp, though we’ll reserve full judgment until we can see the photos on a full-size screen.
The camera automatically opens in “Zoe” mode, which captures a few seconds of video in lieu of a single shot. This video is captured at the rear camera’s full resolution, and users can pull out single shots from that short clip. This seems like a quick way to eat up storage space, though it may help in shoot-from-the-hip situations where users may prefer to get the camera going first and set up the shot as it captures, trading suboptimal shots for an altogether missed opportunity.

As for Sense, HTC repeatedly, insistently referred to its BlinkFeed during its presentation feature as a way to facilitate “information snacking,” something to do while you’re standing in line at a coffee shop or waiting at the doctor’s office. We were surprised how completely this analogy follows through: the feed, while temporarily sating, doesn’t look like it will be capable of offering much in the way of nutritious info.
Most snack foods are for people who, at that moment, don’t care what they put into their bodies, as long as it’s something to quell the hunger pangs. Likewise, the BlinkFeed seems to be for people who don’t care a whole lot about what they put into their brains, as long as it sates the desire to be entertained.
That’s not to say there aren’t quality services feeding the BlinkFeed. Possible additions include Reuters, The Guardian, and The Independent, but that’s all, right now, for straight news. A representative told Ars that more services would be added before the phone hits store shelves in six weeks, but even this doesn’t entirely solve the problem.
The BlinkFeed appears to lack the ability to add custom feeds from other social services, the way one can with an RSS feed or apps like Flipboard. BlinkFeed does integrate with Facebook, Twitter, and LinkedIn, but it’s not possible to, say, throw in a single Twitter account, as one can with Flipboard. BlinkFeed can also create a feed of Zoe videos from fellow HTC One users, similar to the videos served by the app Vine. However, HTC maintains that network itself, and it will only keep posted Zoe videos for 180 days.
I tend to be picky about where and how I consume news and information. My job necessitates that I be able to go through a lot of information, quickly, from sources I trust, and I also need to iterate and edit that part of my workflow regularly. Hence, BlinkFeed would be a bust for me. The service’s constraints, which should lessen by the time the phone launches, may be acceptable to most users who value quick access over control and don’t feel the need to optimize that part of their information consumption, but it doesn’t appear it will ever let them do much of the source selection work themselves.
Tried and true power users may be few in number, so centering a consumer smartphone on their needs may not be a commercially viable endeavor. But HTC seems to have foregone a lot of flexibility that would accommodate those who like a little more control in favor of guiding customers' hands in how they use the phone. This may not only be difficult to adapt to; it could also be difficult to leave behind.
If you like everything about the phone but BlinkFeed, you’re out of luck: as the phone ships, BlinkFeed is the main home screen, and reps tell us there is no way to change this.
The HTC One is set to debut in “late March” for $199 with a two-year contract on Sprint, T-Mobile, and AT&T, as well as on over 100 more carriers worldwide.