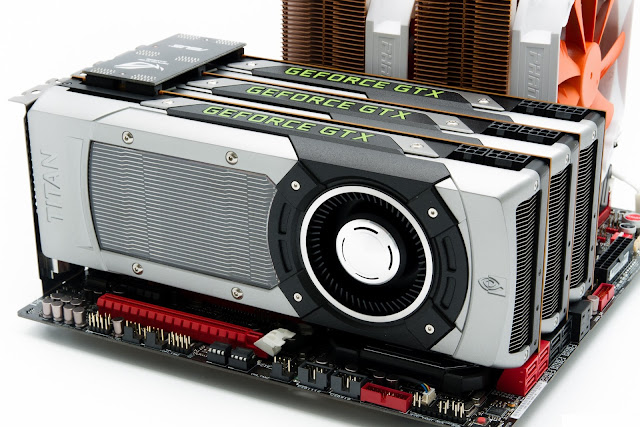 Nvidia has announced the GeForce GTX Titan, which the company claims is the world’s fastest graphics processor. The GPU is designed to handle the most demanding games by combining the processing power of 2,668 graphics cores.

The GeForce GTX Titan should technically provide smoother graphics rendering and support display resolutions such as 4K or higher, according to the company. The Titan has 75 percent more processor power than the GeForce GTX 680 GPU, which was erstwhile fastest graphics processor by Nvidia.

Coming to technical side of things, the GTX Titan delivers 4.5 teraflops of single-precision and 1.3 teraflops of double-precision performance. A company spokesperson said that the Titan is about 35 percent faster than its predecessor and has 7 billion transistors. The higher core count should also enable the GPU to crunch calculations in a more power-efficient manner. That’s possible because instead of cranking up clock frequency, Nvidia has added more cores to speed up the Titan.

With 2,688 CUDA cores, 6GB of GDDR5 RAM and 7.1 billion transistors packed into the 10.5-inch frame, Titan's capable of pushing 4,500 Gigaflops of raw power. Nvidia is positioning the Titan as the GPU that will "power the world's first gaming supercomputers." At the launch, the company showed off the Titan connected to two others running together thanks to a three-way scalable link interface (SLI). The setup powered the highly graphics-intense Crysis 3 running at its highest settings. It also powered a whopping 5760 x 1080 resolution across three monitors.

In a statement announcing the release, Nvidia said that the chip fits into PCs the size of gaming consoles. There are already systems available with the new graphics card in the US, but thanks to the $999 (Approx Rs 50,000) price tag, it will be an expensive proposition.
Digital Storm's Bolt PC will feature a single Titan GPU, replacing the older GTX 680. But things are taken to ridiculous levels with Origin’s offerings. The PC maker is offering a variety of setups featuring the Titan and you can also trick out your system with up to four Titans working together in an SLI configuration. Of course, that would be a ridiculously expensive system indeed, not even taking into account other components of the build. Other PC makers like CyberPower and Falcon Northwest have also announced systems with the Titan ticking within. CyberPower’s Fang III gaming PC should especially attract attention. The company has termed it a “gaming supercomputer", and the system starts at $1,699 going higher up depending on the configuration.

The Titan is based on the Kepler architecture, which is the basis for the graphics processors in the US Department of Energy’s Titan supercomputer at the Ridge National Laboratory. It is often called the world’s fastest supercomputer.