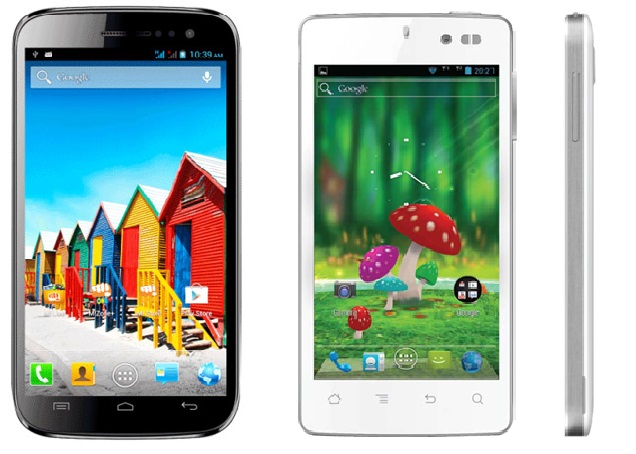 In a developing and price-sensitive market like India, not everyone can afford a high-end smartphone. Indian phone makers like Micromax and Karbonn are trying to bridge this gap by offering affordable smartphones with high-end features. Both Micromax and Karbonn are competing in this space with their first quad core smartphones showcasing desirable features and price tags under 15K. Let’s take a close look at the devices to know which one fares better. Karbonn's S1 Titanium is up for pre-order and will hit store shelves some time next month while the A116 HD is also expected to release in February. So, please note, this comparison is based puerly on the specs on paper. Expect full-fledged reviews as soon as we get our hands on the devices and a follow up comparison later on.

Micromax A116 Canvas HD – Rs. 14,999
This is the first budget quad-core phone announced for the Indian audiences. However, its highlights aren’t limited to the processor or the price tag.  Micromax has ensured that its A116 Canvas HD users also get a superior set of features like a 5-inch display and an 8 megapixel snapper. It’s nice to see Micromax include an IPS display with HD resolution (which means pixel density of up to 294ppi), while the 8MP snapper with autofocus and LED flash is quite an appreciated feature for a smartphone at this price point.

The A116 Canvas HD is powered by MediaTek’s MT6589 SoC, which contains a quad-core ARM Cortex-A7 CPU and PowerVR Series5XT GPU. So one can expect a snappy performance. On board memory is 4GB while users can easily expand it via the microSD card slot. Micromax has employed the Android 4.1 Jelly Bean, the latest version of the operating system. However, we aren’t sure if you’ll get all the OS updates. Connectivity options include 3G, EDGE, GPRS, Wi-Fi and Bluetooth. One of the key elements of the phone is the Rs 14,999 price that one will have to shell out for the device.

Karbonn S1 Titanium – Rs. 10,999
On the heels of the A116, Karbonn quickly put forth its S1 Titanium quad-core smartphone. As of now, this is the cheapest quad-core smartphone for the Indian market at Rs 10,999. Karbonn has equipped the device with a 4.5-inch display. It has a qHD or 960 x 540 resolution, which puts the pixel density at 244.7ppi.

Cheapest quad-core smartphone in India
Karbonn’s website mentions a quad-core Qualcomm Snapdragon processor that clocks at 1.2GHz. The 4GB of internal memory can be expanded via the microSD card. On the connectivity front, one will find support for 3G, EDGE, GPRS, Wi-Fi 802.11 ‘n’ along with support for Draft b and g. This device also runs on the latest version of Android.

Let’s put them in the ring and see which one comes out as the winner. 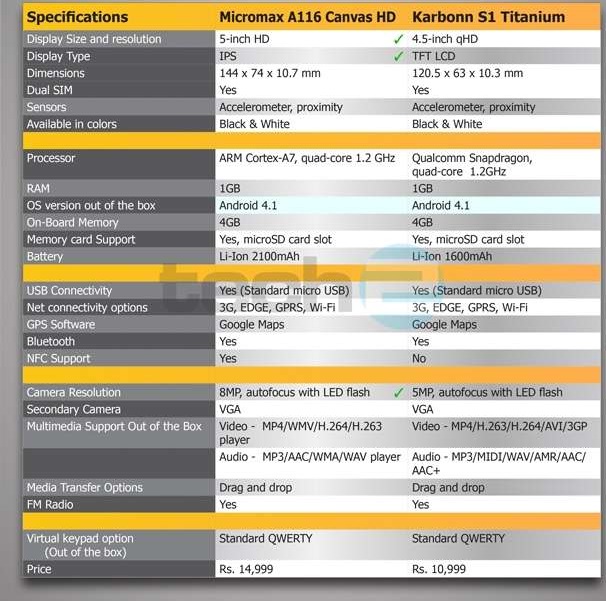 
The bottom line
As you see, most of the specifications of the Micromax A116 Canvas HD and the Karbonn S1 Titanium are the same. However, despite the higher price of Rs 14,999, the Micromax A116 Canvas HD comes across as the clear winner here – at least on paper. Micromax has upped the bar for the sub-15k devices by offering a gigantic 5-inch HD IPS display and an 8MP AF camera. Currently, there is no Android device offering such impressive specifications at this price point. On the other hand, Karbonn has roped in a possibly better processor but has compromised on the display size and camera to offer thier device at a lower price tag.