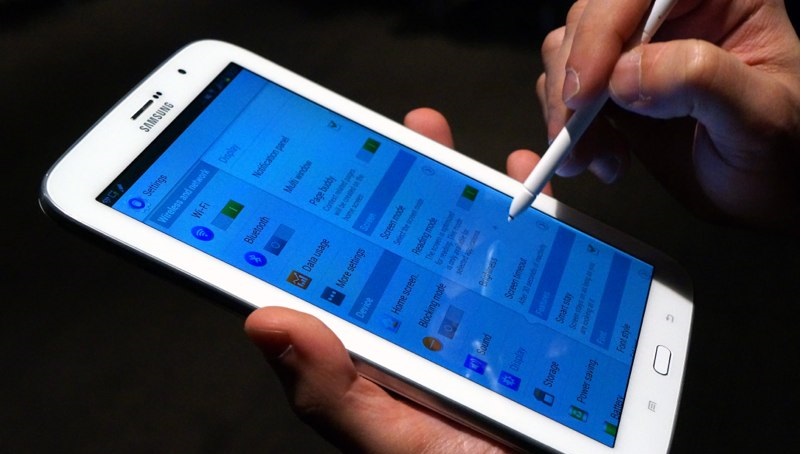 An updated, larger Galaxy Note from Samsung was inevitable. Given the undeniable popularity of mid-size tablets (see: Apple iPad mini), it's no surprise the Korean electronics giant would want to strengthen its foothold in a category it helped create. It was just three short years ago that Samsung introduced the Galaxy Tab and now, three Notes later, it's ready to perfect the one-handed experience. With this new Note, the company's culled the best of what's around its Galaxy into an 8-inch form factor, housing a 1,280 x 800 TFT display, Exynos 4 Quad with 2GB RAM (clocked at 1.6GHz), TouchWiz-skinned Android Jelly Bean 4.1.2 OS, S Pen (and suite of associated apps), as well as radios for HSPA+ and WiFi into that familiar, lightweight plastic body.
But that extra inch alone isn't the Galaxy Note 8.0's main attraction. Samsung's wisely made use of the additional screen real estate to bundle two extra features. Building upon market research that indicates over 80-percent of tablet use takes place within the living room, the company's partnered with Peel for its Smart Remote app, a visual programming guide with remote control functions baked-in that comes pre-loaded on the tab. And, in keeping with its portrait oriented design, the Note 8.0 also incorporates what the company calls "reading mode," effectively optimizing the slate's display for comfortable e-book use. 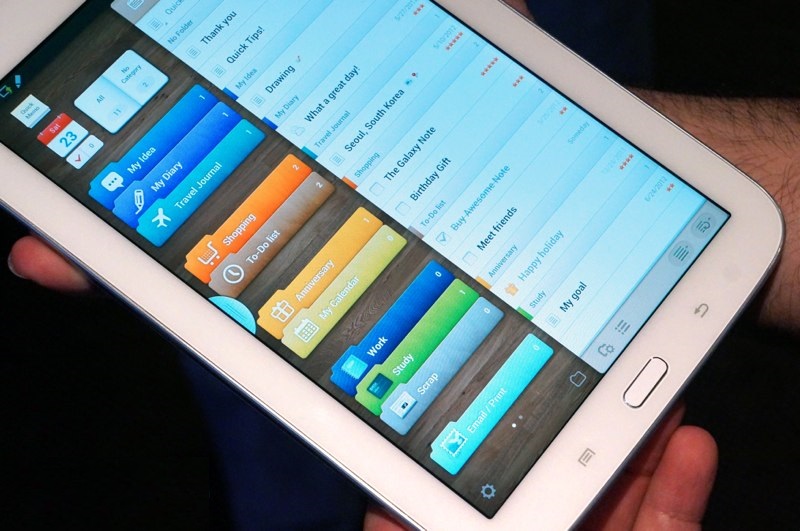 If you've spent any amount of time with the Note II, you'll know what to expect from the Note 8.0 as its external design is incredibly similar. You get the same all around plastic build -- ringed here with metal -- ports for microSD and micro-SIM, 3.5mm headphone jack and physical home key. But where the Note 8.0 strays is one of its key improvements: users can now effect the capacitive menu and back buttons using the S Pen. Admittedly, it takes a bit of retraining to get used to -- you'll want to use your finger out of habit -- but it's a wonder Samsung took so long to implement something so crucial. So, you can officially hang up that gripe right now. 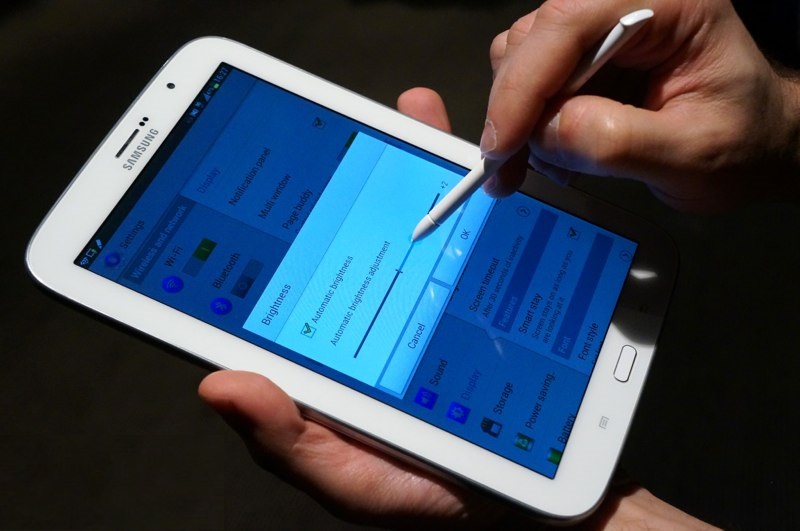 At 338 grams (11.9 ounces), the Note 8.0's not much heavier than the iPad mini and as it's made to be held one-handed, you shouldn't feel much wrist strain with extended use. We were able to comfortably grip the entire back of the 7.95mm thick tablet, which measures 210.8mm x 135.9mm (8.3 x 5.4 inches), in our hand while navigating with the S Pen in the other. The Note 8.0's back is non-removable, but that bit's rendered moot by the accessibility of the microSD and micro-SIM slots on the tablet's left edge and a sealed 4,600mAh battery.
With a 1.6GHz Eynos 4 Quad CPU and 2GB RAM under the hood, you'd expect the Note 8.0 to showcase nothing but brisk performance. Unfortunately, that didn't appear to be the case as there were occasional moments where the tablet seemed to slightly hesitate before executing actions -- things like dual window view for multitasking or simple app launches. This being the tablet's official unveiling, it's quite possible the model we handled could still benefit from software optimization. So, we'll refrain from passing definitive judgement until a final review unit is in our hands. Apart from that, viewing angles held up well and display brightness shouldn't pose a major issue outdoors in bright sunlight. Though, it is weird to see a Samsung product without an AMOLED screen -- this one's TFT.
Reading mode and Smart Remote are clearly the Note 8.0's two biggest software features, but to make the tab just a bit more alluring, Samsung's pre-loading two other applications suited to the Note 8.0's form and function. Out of the box, users will have access to an S Pen-optimized version of Flipboard which enables Air View hover functionality and headline previews from the main tile page (up to three, in our experience). Also, as a first for Android and Samsung, Awesome Note (a cloud-based annotation app previously available only on iOS) has been integrated into the device as a free service, exclusive to the OEM for one year.

We'd be remiss if we didn't point out that the global version of the Note 8.0 also packs HSPA+ 21 connectivity (850/900/1900/2100MHz). So, yes, you will be able to hold it up to your head and make voice calls however silly that may look. Of course, it's more likely that prospective users will want to pair the tab with earbuds and thus reduce the risk of public humiliation. But this voice call perk won't be heading stateside. Samsung's confirmed to us that, as of now, the US market will see a WiFi-only variant and its specs could change slightly, too. An LTE variant is also on deck.
Details on pricing and regional release dates are still be announced. Just don't hold your breath for that news to come this week. What we do know for certain is that there'll be two storage configurations -- 16GB and 32GB -- for the global unit's launch sometime this second quarter. So while you wait for the Note 8.0 to make its slow crawl to market, check out our demo video above and feel free to sound off in the comments below.