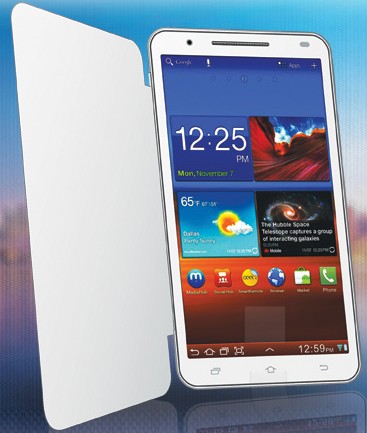 California-based Swipe Telecom that released a range of Android tablet PCs in India recently has announced a tie-up with MTV to launch its first co-branded ‘Fablet’ called MTV Volt, priced at Rs 12,999.

Short for ‘fabulous tablet,’ the 6-inch device will be the first Fablet to feature an in-built TV-player that will offer on-the-go access to MTV. The company says that the Fablet is a portable TV as well as an Android tablet. It has Wi-Fi, dual cameras and GPS functionality.

Weighing only 239 grams, MTV Volt sports a white velvet body and textured back for better use, and comfortable handling. The Fablet also comes with in-built apps that allow you to network on Facebook, LinkedIn and allows you to download videos. The MTV Volt is equipped with a 1GHz, dual-core processor based on ARM Cortex. The processor is backed with 512MB of RAM.

The Fablet runs Android Jelly Bean 4.1.1 and has Flash 11.1 support. MTV volt’s 6-inch HF capacitive touchscreen has 5-point multi-touch and pixel dimensions of 854x480. The Fablet also shows preference to music with FM and music players and can multitask easily between music and games easily.

The Fablet has an 8MP rear camera with flash and 1.3MP front facing camera. MTV Volt has a battery Li-Ion Polymer 3,200mAh that the company claims provides a talk time of 8-10 hours. It has 4GB of on-board storage and can be expanded up to 32GB through external microSD memory card.

Sandeep Dahiya, SVP and Business Head - Consumer Products, Viacom18, commented on the MTV Volt, “MTV Volt is a ‘made to order’ product for the generation that’s constantly communicating, entertaining and socializing. With features that address their needs and price-point that suits their pockets, we’re confident about MTV Volt by Swipe, to generate a great response.” He also said that MTV planned to develop a diverse portfolio of MTV phones and phablets.

The Fablet will be available across 10,000 retail points in India, Swipe e-stores as well as online portals such as Flipkart, Snapdeal, Infibeam, eBay, and more.


In December last year Swipe Telecom launched the Swipe Legend Tab for Rs 11,999. The Swipe Legend Tab entered the Indian tablet market with its tablet with dual-SIM and a dual-core processor. Powered by a 1.5GHz dual core processor, the tablet demonstrates increased efficiency and high performance. The 512MB DDRIII RAM also enables seamless multi-tasking, which allows the user the liberty to access to several programs, applications and high-end games at the same time without letting the tablet’s performance suffer. The company claims that the standout feature of the Legend tablet is its Dual-SIM capability, which allows users to opt for service plans that can optimise their calling and data usage.