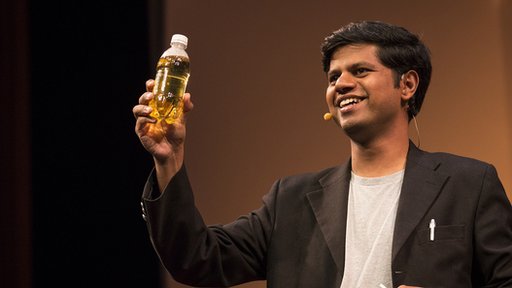 A smartphone app that uses a phone's camera to analyse urine and check for a range of medical conditions has been shown off at the TED (Technology, Education and Design) conference in Los Angeles.
Uchek tests for 25 different health issues and could help diagnose and treat diseases in the developing world.
Increasingly mobile health is being talked up as a lifesaver in such areas. The app is the brainchild of TED fellow Myshkin Ingawale.
"I wanted to get medical health checks into users' hands," he told the BBC. Urine can be tested for the presence of 10 elements - including glucose, proteins and nitrites. These can be used to pinpoint a range of conditions including diabetes, urinary tract infects, cancers, liver problems as well as being used to keep track of general health.Users need to collect their urine and dip a standard test strip into it. The strip is placed on a mat - supplied with the app and intended to normalise the colours on the stick regardless of lighting conditions where the photo is taken.Once the photo is taken the app will analyse which, if any, condition, the colour applies to. Myshkin Ingawale TED fellow
The app will be available from Apple's app store from the end of March for $20 (£13), which includes the cost of the mat and five dipsticks.As well as being used by individuals, the app will be put through its paces in the King Edward Memorial hospital in Mumbai, India. There, its accuracy will be tested against the laboratory machines more normally used to test urine. "If it does well we can make it available to mobile clinics. Instead of buying a $10,000 machine they can use their existing smartphones," he said. Currently Uchek is only available for iPhones but versions for Android will be coming soon, Mr Ingawale told the BBC. While such smartphones may be beyond the budget of many in the developing world, he is hopeful that will not remain the case for ever.
"I'm calling you from a $100 Android phone which I bought from a street market in India. In future smartphones will be even cheaper and all phones will be smart," he said.

Users will need a dipstick along with the app According to the GSMA, the organisation which represents the mobile industry, mobile health service could help save one million lives in Africa over the next five years."Mobile health has immense potential to improve people's lives since it increases patient access to quality healthcare whilst reducing costs," said Michael O'Hara, chief marketing officer at the GSMA."These positive impacts will only grow as the mobile and health industries collaborate on new connected innovations," he added.Health apps that allow users to test their heartbeat, monitor sleep patterns and keep a check on a variety of conditions are growing in popularity."There is huge potential to get the world of bio-chemistry out to users via apps," said Mr Inga wale.Last year at TED, Mr Ingawale showed off a blood test that could be taken without drawing blood.
The test was designed to prevent women dying from anaemia and was designed to be easy for healthcare workers - often untrained - to use in the field. Mr Ingawale is a campaigner for more grassroots medicine, allowing users to play more of a role in their own healthcare. "There needs to be a rethink in the way healthcare is delivered to people," he said. "It needs to be far more decentralised. It can become a consumerist movement in the same way that Wikipedia has been for information."