Boxee Tie up With Walmart: The War for Your Living Room Just Got Real 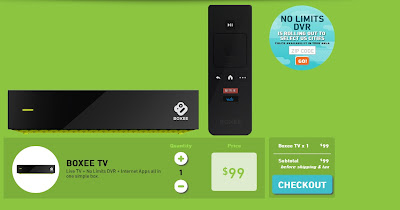 Everybody wants to hang out in your living room. Apple, Google, Microsoft, Amazon — they all want to be there. Some already are. All of them are already on your other screens — the tiny one in your pocket, the medium-sized one in your bag, the big one on your desktop. But the biggest prize, the huge screen in your living room, is still very much up for grabs.
Still, it ain’t a full-scale war just yet. Google TV has utterly failed to catch on. Microsoft’s newly revamped Xbox Video is, well, newly revamped. Amazon Instant Video is still geared more towards tablets and apps than televisions and entertainment centers. And for now, at least, Apple TV remains a hobby, if a “beloved” one. But an announcement from Boxee — until now a minor player, at best, in this market — is a signal that the living room wars are on.
Walmart is going to carry Boxee TV this holiday season. And not just carry it. Walmart is going to push it, heavily, with in-store promotions and marketing mailers, according to Bloomberg. This means the retail giant has decided that internet television, and, more broadly, cord-cutting, is a thing it needs to pay attention to.
Boxee TV is a combination cable box, cloud-based dual-tuner DVR with unlimited storage (that for now is limited to a handful of cities), and internet video delivery service. It even comes with an antenna so people can watch HD shows over the air. You don’t have to choose between getting shows from the internet or through traditional means. Boxee TV lets you do both.
In essence, it’s a transitional device. Much like Google TV, it allows you to get traditional signal and apps all in one place. That makes it easy to transition back and forth from Internet to broadcast TV. But even more intriguing, from a transition standpoint, is the included antenna. If you decide to fully cut the cable, you can still easily get a live high-definition television signal from the major networks and even record it to the DVR.
It’s an interesting device, to be sure. But the bigger deal is distribution. Walmart gives Boxee instant legitimacy. This is the biggest retailer in the world, which means Boxee is going to be everywhere — it hits some 3,000 stores in November.
The two are a good fit. The antenna makes the $99 Boxee TV an attractive option for the cost- conscious consumers who are Walmart’s bread and butter. And it comes preloaded with VuDu, Walmart’s video-on-demand service. That means the more Boxee TVs Wal Mart can sell, the more living rooms it can convert into storefronts for its video service. Clearly, Wal Mart has lots of incentive to make sure people buy it.

Another reason the deal is so important is that in addition to being the world’s largest retailer, Walmart is the second largest consumer electronics retailer in the United States. It already sells Apple TV and Roku, and streaming video players from Netgear and Sony and others. But it’s not exactly geared towards early adopters. Walmart is all about big data and predictive analytics. It’s been applying those tactics to retail longer and better than just about everyone else. So a big bet on Boxee TV, which this certainly seems to be, means Walmart sees real tension in the industry. More to the point, it means that cord cutting is clearly on the event horizon.

And that’s exactly why the deal is likely to be the opening salvo in the next big war. If Walmart is betting, you can be sure there’s a lot of cash on the table, and everyone is about to try to grab it. Boxee TV is out in front right now in terms of what it can pull off in combining signals and sources and getting them all back to your television on a single input. Don’t expect that to last.