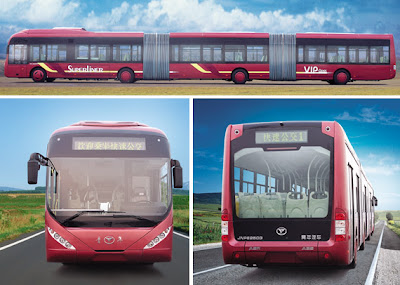 
City dwellers in China now outnumber rural dwellers for the first, official figures show.
China is a country of extremes. The world’s most populous nation; the world’s fastest-growing major economy, the world’s biggest exporter.  It has the world’s longest sea bridge, the world’s fastest train and is the world’s biggest market for cars. The list goes on and on. And its record breaking ways look like they are set to continue for a while yet.
Take that last point. In the mid 80s the country only produced a few thousand cars and hardly anyone actually owned one. Now, it is the world’s largest producer of cars and the world’s largest consumer. Last year, 18 million vehicles were sold, dwarfing the 12.7 million sold in the US. And this sudden explosion has meant a massive rise in one thing: traffic.However, the ever expanding urban population needs to keep moving and so the government has turned to another extreme solution: the mega bus.“China is generally looking very hard at new public transport systems” says John Austin, an independent public transport who has worked in Europe, Australia, Singapore, and Hong Kong.  The advantage of buses, he says, is that they can be quick – and cheap – to install, compared to other transport systems, like light railways.
Massive moves
Take the 3D Fast Bus from the Shenzhen Hashi Future Parking Equipment Company. This prototype behemoth could carry up to 1,000 passengers its designers believe. But its most innovative feature is not its size, but its design. It is designed to skip traffic problems by straddling the road, allowing it to cruise over gridlocked traffic or allowing traffic to flow underneath it when it is stopped.  Passengers ride in a cabin 5m above the ground, on wheels supported on streamlined stilts. Its designers say the electric bus could reduce traffic jams by up to 30%, and cost only 10% of the price of a subway to build.
The design was first announced 18 months ago but has seemingly stalled. But, for Austin, it is a sign that the Chinese government is willing to take drastic action to move its citizens around
“They’re clearly looking at options that will enable them to carry large loads of passengers” says John Austin.
Indeed, two cities – Beijing and Hangzhou – have just announced that they will take delivery of fleets of what could be the world’s largest bus - the catchily named Youngman JNP6250G.
The massive mover will carry up to 300 passengers at a time and will  have two concertinaed sections to allow it to turn corners like a regular bus is 25m (82ft) long - around 13m longer than a regular bus.  To ensure they cut through urban traffic they will use dedicated lanes in both cities, something that may allow drivers to test their top speed. One driver reportedly told the Chinese Youth Daily newspaper that he reached 51mph (82km/h) on a drive from Zhejiang Province to Shanghai.
Although the JNP6250G has been described as the “largest bus in the world” others challenge the title.
Curitiba, capital of the Brazilian state of Parana, operates the Ligeirao Azul bus - a snaking monster that is 3m (10ft) longer than its Chinese rival but carries 50 fewer passengers. It is one of a handful of bus designs that cruise the streets of Curitiba, each with a different function. The biodiesel-fuelled Ligeirao Azul, for example, is a “Fast Transit” system that uses exclusive lanes and have priority at traffic signals in an attempt to cut down on journey times.  It is part of an exclusively bus-based transport system that has won worldwide acclaim. In fact, the bus scheme has been s successful that it is estimated that 80% of the city’s residents now use the service – something that has helped reduce congestion, pollution and commuter frustration.