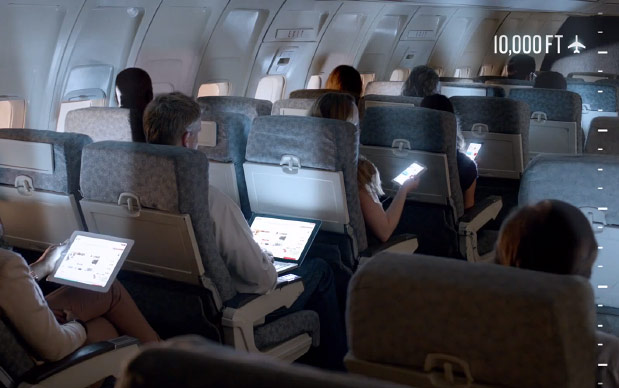 By early 2014, passengers may be able to use certain electronic devices in airplane mode during takeoff and landing, according to a New York Times report. The publication's industry sources say that the Federal Aviation Administration may announce more lenient electronics policies later this year, allowing passengers to use "reading devices" during takeoff and landing -- while it's not clear which gadgets would qualify, cellphones would remain on the ban list. The FAA commissioned an industry group to study the issue of in-flight electronics use -- the team, which includes representatives from Amazon, Boeing, the CEA, FCC, and others, will announce the results of its study by July 31st.
The issue has support from key lawmakers as well. Senator Claire McCaskill is calling the FAA out on its authorization of pilots to use iPads in the cockpit and flight attendants to use devices of their own, while restricting passengers from reading books on e-readers -- "A flying copy of 'War and Peace' is more dangerous than a Kindle," she told the Times. And we'd have to agree. Until the FAA announces a policy revision, we all have no choice but to reluctantly comply with the ban, but with devices like Google Glass on the horizon, updated restrictions could not come too soon.