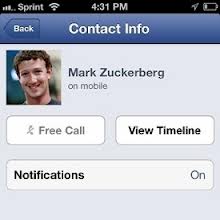 While Americans and Canadians have enjoyed making app-based voice calls to their Facebook contacts since January, their overseas buddies have missed out -- until now. The social network's iOS Messenger app has just doled out the calling feature to the UK and potentially other parts of Europe too, although we haven't yet been able to confirm exactly how far and wide the update reaches. It's worth noting that the feature isn't enabled on the Android iteration yet, either. The new calling service isn't powered by Skype this time, although it works in a similarly uncomplicated way, with the ability to leave voice messages with any busy users. According to Pocket-lint, this is an experimental version, warning that you might experience a few bugs and glitches as you play around with it, but hey, you're getting free calls to (most of) your friends, barring any data charges. We've tested the new feature and it's working for several of our UK editors over both WiFi and 3G, but if you haven't already picked up the messaging app yet, you can grab it at the source below.