Google Keep allows to take a note by Voice,Type or Photo

With Google Keep you’ve got a note-taking interface created by the company to be a one-stop-shop inside Android. Like Google Now, this is another value-added element that will be present in most or all future Android devices, and it’s tied to your Google account through Google Drive. If you head to https://drive.google.com/keep/ right this minute (and you’re logged in to your Google account), you’ll find an interface not unlike the one we’re looking at today on an Android smartphone.

Google Keep allows you to take a note that includes any of the following: typed text, dictated text, recorded sound (with dictated text – a bit different than a straight-up sound recording), photos (but not video as of the publish date of this review), and checklists. This system is an extremely sleek, basic, and simplistic iteration of what Google’s competitors work with. 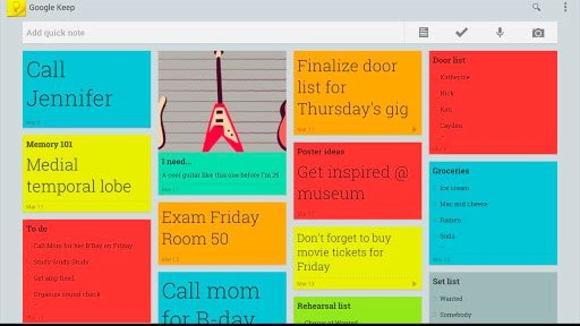 If you look at Evernote, you’ll find a system for taking notes that’s able to accept emailed notes, works with Skitch for hand-written notes and drawings, works with sound recordings in full, video, photos, text, searchable images, business card scanning, and much, much more. Basically Evernote is currently in a whole different league when it comes to being all-inclusive.

In Google Keep you’ve got Google’s take on things. While we’d be baffled if we heard a Google employee claim this was a good competitor with the other more mature systems out
there, it wouldn’t be out of the question for Google’s set of features to eclipse the rest in a few years time. But that’s a bit forward-thinking – this app has just been released this week. 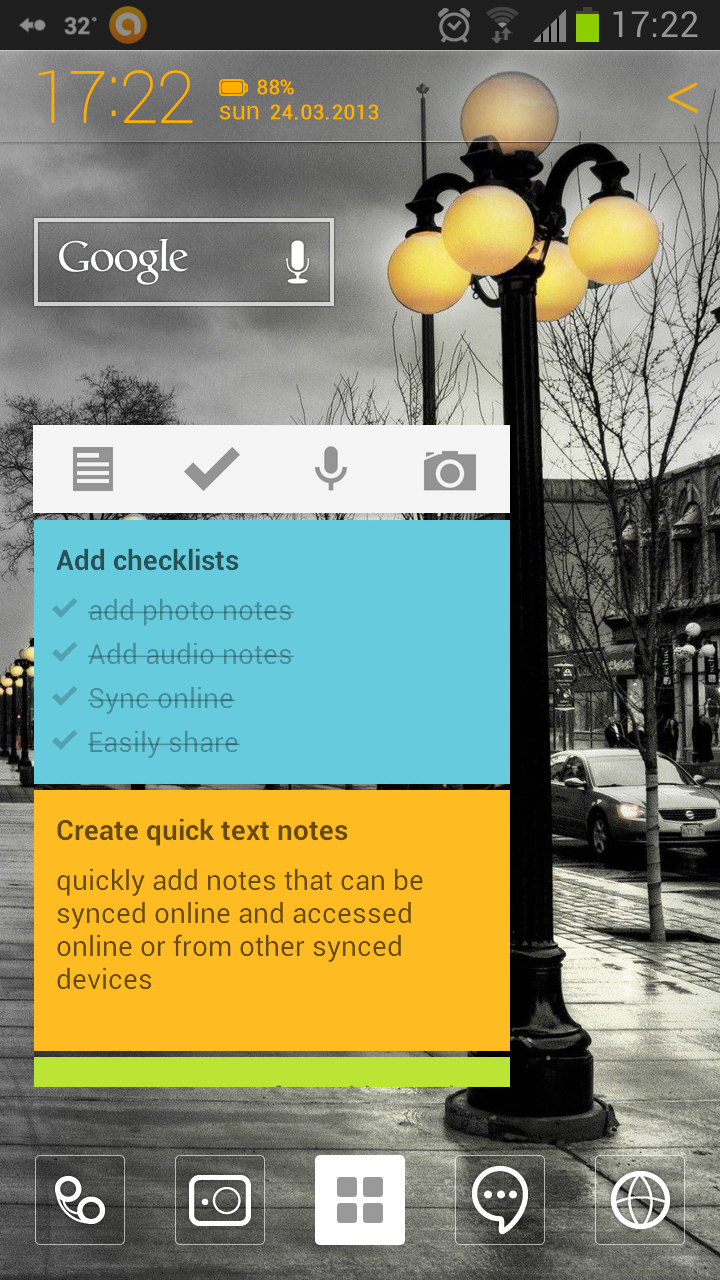 You’ll be able to access a new note through several shortcuts, immediately moving to your camera for a photo, your keyboard in a note for text typing, your keyboard and a list for checklists, or a microphone for voice recording/dictation. These four shortcuts are represented by familiar icons along a bar that can exist on your smartphone or tablet as a widget on your homescreen.
Hot Stuff: Google Keep also offers a couple of Lockscreen Widgets for Android 4.2+ that you can use to access your notes right at the power button.
While what you’re able to do with these notes is relatively limited, the entire interface is exceedingly smooth, and it is rather nice to be able to instantly access the notes you take from your smartphone, tablet, or desktop machine on the fly. You can download the Android app from the Google Play app store now absolutely free, and we wouldn’t be surprised if an iOS version came calling sooner than later. Check it out!