How the Nvidia Shield could solve the problems with streaming your games. 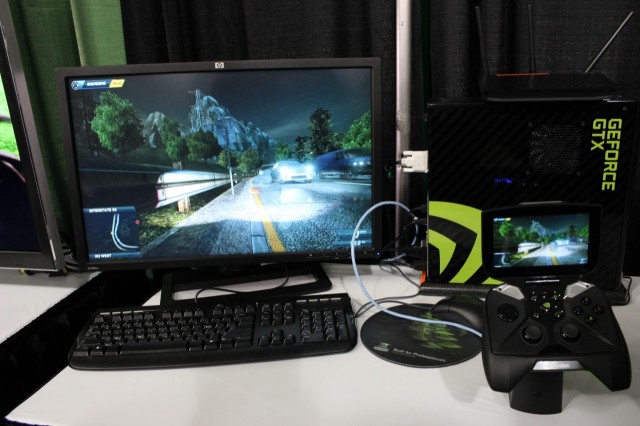 In practically every one of its major press conferences since last year's GPU Technology Conference, Nvidia has reminded us that they want to virtualize the graphics processor. The company wants to take it out of the computer on your lap or on your desk and put it into a server somewhere without you noticing the difference. It introduced the concept at GTC 2012. Then over the course of the next year, Nvidia unveiled the actual graphics cards that would enable this tech, started selling them to partners, and also stuck them in Nvidia Grid-branded servers aimed at both gamers and businesses.
The difference between Nvidia's initiatives and more traditional virtualization is that the company's products support relatively few users for the hardware they require. The Grid gaming server supports 24 users per server box and the Visual Computing Appliance (VCA) only supports eight or 16
depending on the model. Most virtualization is all about dynamically allocating resources like CPU cycles and RAM to give as many users as possible the bare minimum amount of power they need. Instead, Nvidia's is about providing a fixed number of users with a pretty specific amount of computing power, thus attempting to recreate the experience of using a regular old computer.
There are situations where this makes sense. Given the cost of buying and maintaining workstation hardware, Nvidia's argument for the VCA seems more or less convincing. But I'm slightly less optimistic about the prospect for the Grid gaming server, or any cloud gaming service, really—call it leftover skepticism from OnLive's meltdown earlier this year.
That doesn't mean the technology behind cloud gaming servers is bad, or that the problem they want to solve—that not all devices have high-end graphics hardware in them—doesn't exist. In fact, after logging some extended playtime with an Nvidia Project Shield console at this year's GTC, I'm convinced cloud gaming has a future. I just think it looks less like OnLive or the Grid gaming server, and more like what the Shield does—streaming all of the games you already own from a gaming PC already connected to your other, less powerful devices. Let's walk through the biggest issues with a service like OnLive or something based on Grid, then consider how moving the same technology on to your home network solves them.

Most of the problems we'll talk about here are going to be technical, but this one's all about business. No matter what technology you're using, a company like OnLive or one of Nvidia's Grid customers is going to have to cut deals with publishers and independent game developers to make those games available on the service. While the way Grid is implemented suggests that developers won't have to do any extra work to make games compatible, that won't be the case for all implementations. This whole process takes time and money, and in the end you're not guaranteed to get all of the games you want in any one service.
Streaming from your local Steam library neatly circumvents this limitation. Not only are all the games you own already paid for and available, but future games from most developers and publishers are practically guaranteed to come to Steam. There are, of course, notable exceptions—but they're exceptions and not the rule. Any new cloud gaming service would need to have a critical mass of customers to be able to provide a big game library, but there's no easy way to achieve critical mass of customers without a big game library.

No matter how fast your Internet connection is or how near you are to the server room actually rendering your game, Grid just won't be 100 percent as smooth as local rendering all of the time. There are too many variables in play—your own home network, your ISP's equipment and wiring, the load on your ISP's network, your distance from the server, and any number of other issues that could impact your experience negatively. Unlike something like Netflix, which can buffer video to mask these issues, cloud gaming needs to be streaming in real time all the time.
Now, move the computer doing the rendering from someone else's server room into your own home. The only limiting factor is going to be your own home network. The most unpredictable elements have been removed, and you'll have a much faster connection between your PC and your tablet than you'd be able to get through most Internet service providers.

Each one of Nvidia's Grid servers can support up to two dozen users at a time, and each one of those users can only have so much GPU horsepower assigned to them at once. Measured in FLOPS, the amount is roughly equivalent to one of the company's mid-range GeForce GT 640 cards. Especially as games get better-looking and this technology moves beyond the 1366×768 display of the Shield console (and it seems reasonable that it will), you're going to need more graphics horsepower to make these games look as good as they can.
Granted, turning all of the settings in a given game all the way up is more of a "nice to have" than a "need to have." But there are plenty of gamers who game on a PC precisely because they want to crank the settings up beyond what a laptop or game console is capable of.

The main problem with the Grid gaming server from the perspective of a potential service provider is that it just doesn't seem like it would scale particularly well. It might be difficult to turn a profit between the initial hardware investment (which is made all the larger by the relatively low number of simultaneous connections each box supports), the need to cut and maintain software licensing deals with publishers, and the space and power required to keep all of the servers up and running. Keeping streaming local passes that cost on to gamers, of course, but if your Grid-powered gaming service can't turn a profit and had to shut down, they're going to be left out in the cold anyway.


Not a perfect solution, but a more realistic one

Despite all the potential upside, there are still drawbacks to streaming stuff locally as opposed to through a server like Grid. The first is that you have to own and maintain your own gaming PC. This probably isn't too onerous a task for the people interested in this sort of thing, but you'll have to pay for the cost of the hardware, the games, and the power usage rather than offloading it to some third party.
The second issue is that it becomes more difficult to leave the home with your PC game library. Even if you run your own VPN server at home (or if you otherwise modify your network connection to allow access to your game "server" from outside of your network), you're likely to encounter some of the same connectivity and bandwidth issues you'd get with a Grid server.
What we need now is a chance to spend a few days streaming games from our PC to the Shield or a Shield-like tablet. The streaming functionality seemed to work well enough in Nvidia's demo, but real-world testing is always warranted. If it works as intended, you can keep your cloud gaming service to yourself—my "private cloud" will be more than good enough.