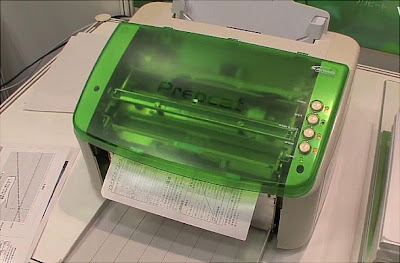 Printing has come a long way since the computer landed on the desktop. First, there were daisy-wheel printers, then dot-matrix printers, then inkjet and laser printers. The problem with all of these output devices, of course, is that they require paper -- lots of it -- and expensive consumables, like toner. Why can't someone invent an inkless, tonerless printer that allows the operator to reuse paper?
As it turns out, this isn't a new idea. Xerox has been working with so-called electronic paper since the 1970s. Its most promising solution is a type of paper called "Gyricon." A Gyricon sheet is a thin layer of transparent plastic containing millions of small oil-filled cavities. A two-colored bead is free to rotate inside each cavity. When a printer applies a voltage to the surface of the sheet, the beads rotate to present one colored side to the viewer, offering the ability to create text or pictures. The images will remain on the paper until it's fed through the printer once again.
A Japanese company, Sanwa Newtec, is offering its version of inkless, tonerless and rewritable printing technology. Its product is called the PrePeat rewritable printer, which, like the Xerox solution, requires plastic paper. But PrePeat uses a different technique to produce an image. Each sheet of paper comes embedded with leuco dyes, which change color with temperature -- colored when cool and clear when hot. The PrePeat printer, then, heats and cools the paper to first erase an image and then create a new image in its place. According to the company, a single sheet of paper can be reused 1,000 times before it needs to be replaced.
What's the catch? A single PrePeat printer costs almost $6,000, while a pack of 1,000 sheets of paper costs more than $3,300. If you're running a printing-intensive business, you might be able to recoup your investment over time. But the average PC user likely won't be willing to shell out that kind of money to replace a standard printer