The Lenovo IdeaPad Yoga 11:A Better laptop than a tablet 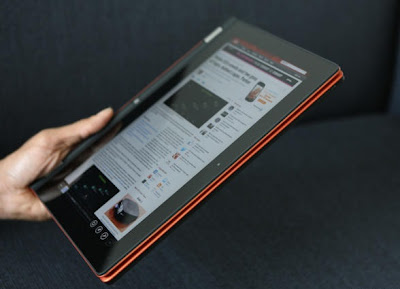 This Laptops's  keyboard is permanently attached to the tablet section and when in tablet mode, it’s bulky, heavy, and awkward to hold. Thankfully, if you’d rather lay your tablet down flat or simply watch movies on it, the Yoga 11’s flexible, dual-hinge, $649 body gives you a few useful positions to choose from. Also, in laptop mode, it makes for a pretty cheap ultrabook, as long as you don’t mind being saddled with Windows RT.

If the thought of buying a device with RT causes you to wake up in the middle of the night screaming, then you may want to wait for the Windows 8 version of the Yoga 11, called the Yoga 11S, coming this summer for
only $150 more. The Yoga 11S will also include a higher-resolution screen and a faster non-ARM Intel Core i5 CPU. Or, if you find 11 inches of screen size to be lacking, the 13-inch Yoga 13 may be more up your alley. 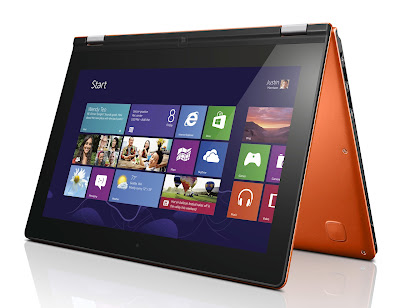 Compared with the Microsoft Surface RT, the Yoga 11 is a better lap computer and offers more ports, including two full-size USB port and a full-size SD storage expansion slot. However, the Surface's Type Cover keyboard is more comfortable, its Internet performance consistently zippier, and it’s a lot thinner and a lot lighter as a tablet.
If you’ve made your peace with Windows RT’s offerings, the Yoga 11 serves as the best RT device next to the Surface. However, it’s a better laptop than a tablet, so its appeal will depend on what you're looking for.
Finding your center
Unlike all previous Windows RT tablets, the Yoga 11's screen can’t be detached from its keyboard. The two are permanently linked via dual hinges that allow the screen to tilt back 360 degrees, until the back of the screen lays flush with the back of the keyboard. In this position, the Yoga 11 is the closest it'll ever get to feeling like a normal tablet. That is, if you don’t mind the 2.6-pound weight, 0.7-inch thickness (at its thickest), or the feel of keys on the back of your tablet while you attempt to hold it with one hand, and read the morning’s news and sip your coffee with the other. No, the Yoga 11 doesn't make for the best portable tablet; it feels heavy and awkward to hold from this position. However, it works fine once it's laid down flat. 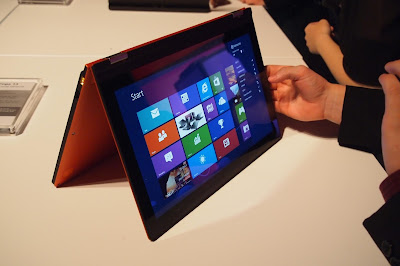 You can also orient the Yoga 11 in three other ways. There’s Tent mode, or, as I like to call it, the downward dog position. OK, I don't actually like to call it that, but it feels appropriate. Here, the screen is tilted back about halfway past 90 degrees, then propped up on the top edge of the screen and bottom edge of the keyboard, with the screen facing the user. Not a bad position if using the tablet on a desk, but also not all that different from the third position that sees the keyboard lying flat, keys down, again with the screen facing the user. This was the ideal position for movie-watching, allowing you to easily tilt the screen back and forth to find the perfect position, with no keyboard futzing with your movie engrossment.