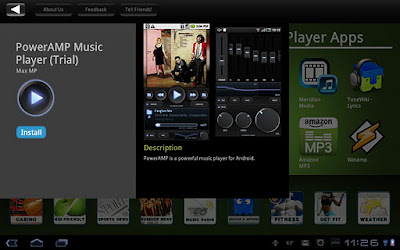 It's hard to describe the standard Android music playing experience, as thanks to the amazing variety of skins and interfaces out there, there isn't really one unified way that every Android user uses to play and manages their tunes.
Yes, Google supplies a barebones music player as part of the standard Android software, but phones with custom user interfaces laid over the top of Google's code from the likes of Motorola, Sony, HTC and most of the other makers, ignore this in favour of offering their own customised players, completely changing the player's look and feel in the process.

Some, like the music player that comes pre-loaded in HTC's recent models like the One X and One S, integrate lyric-finding services, internet streaming radio and more, while Sony's been adding YouTube artist searches and social sharing of track data to its Android models for years. So many phones, all with wildly different MP3 playback options.
The best way to unify your Android music player experience is therefore to use one of the many standalone apps out there, all of which offer their own take on how to best make your MP3 collection sing out of your phone.
Here are 10 of the best ways to get your mobile managing your tunes today.

A really innovative option for those with a powerful phone, N7Player gives you a multi-touch, zoomable music interface, coupled with modular player screen that's beautifully designed whether you're using it in portrait or landscape mode. Home widgets and lock screen controls, a tag editor, lyric look-up and much more make this an excellent showcase for Android audiophiles.

One of the most popular indie Android music players, thanks to combining a stylish design with stacks of graphic equaliser tools, crossfading, lyric display, Last.fm scrobbling, MP3 tag editing from the phone itself and much more. The trial version's free, but Poweramp is one you won't begrudge paying a couple of quid for.

If you want something very different and a little bit odd, try this. The app, which we think is called Cubed, presents your music collection on, yes, the surface of a cube. Swiping left to right runs through your collection alphabetically, while paging up and down goes through all your albums. It downloads album art, scrobbles to Last.fm and is generally fun to fiddle with.

If you have an account with the famed internet radio site Last.fm, there's a decent, if rather basic looking, Android music player app to go alongside it. You don't get much in terms of fancy audio playback options, but it gives users access to their previously "scrobbled" music tracks, meaning you instantly have access to your tunes via your mobile's data link.

To call Amazon MP3 a music player is quite the understatement. As well as playing your legacy MP3 collection, this integrates with Amazon's cloud storage service, letting you sync your offline collection to the "cloud" for streaming through the app. You have to pay to upload lots of your own tracks, though, with the idea really being to encourage you to buy MP3s through Amazon -- which are free to store and stream through the app.

A rather mixed option this. MixZing's minimalist and modern front end takes you through to a pretty bland player, but the killer feature here is a customisable graphic equaliser with the option to apply its audio filters to all your tunes, one particular album or even one individual track. Things don't get much more customisable than that.

DoubleTwist's one of the most comprehensive music apps available for Android, fitting in pretty much everything you might ever need. It syncs with PC, Mac and even iTunes playlists, manages podcast subscriptions, looks up missing album artwork and more. Some of it's free while other modules are unlocked via in-app purchases, but at least that means you get to give it a shot for free.

The idea behind this one is to bring the "Holo" Android 4.0 visual style to all Android models, also offering loads of swipe-activated control features. In terms of music playing innovations there aren't many here, but you do get some smart Home screen widgets and lock screen controls. Plus it could convince someone you've got Android 4.0 on your old T-Mobile Pulse.

A properly hardcore option here. PlayerPro incorporates a very sexy graphic equaliser, lets you browse your tunes using a classic folder view, is completely skinnable if you don't like the default look of it and even lets you edit the tags of your audio files, should you like to while away long journeys obsessively naming MP3s files using the same structure. It also supports automatic album art downloads, to help jazz things up a little.