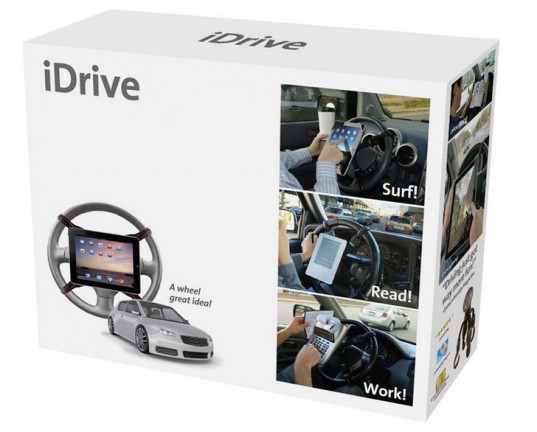 Many of us thought Google had the market cornered when it came to driverless cars, but Apple made a shocking announcement today with news that they would be releasing a new device and app that can transform ANY vehicle into a driverless one! Dubbed the iDrive, the system can be installed without the help of a professional and simply needs an iPhone or iPad to operate.
“People have been saying that Apple has been losing its edge when it comes to innovation,” said Tim Cook at a press conference in Cupertino, California, this morning. “But if the iDrive proves anything, it’s that we’re innovating. Google better watch their back.”

That may be so, but iDrive works similarly to Google’s driverless car, depending on a mounted camera, sensors and an internal computer to process everything the car “sees”. The system drives at the speed limit it has stored on Apple Maps and maintains a minimum distance of five feet from other vehicles. Like a Google car, a human driver can override the system by stepping on the brake, accelerating or turning the wheel. The iDrive even comes with a wheel mount for the driver’s iPad or iPhone — meaning you can check your email and watch some Hulu while making your way to your destination. 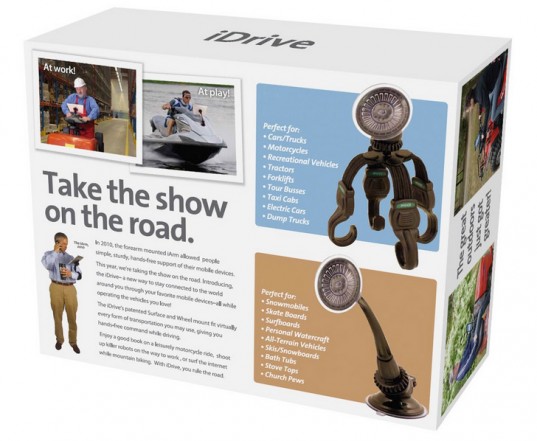 What makes Apple’s system the more superior to Google’s is that it can work with literally any vehicle. This morning Cook played a video showing the device being used not only with a Prius, but a jet ski and even a lawnmower. “We want Apple products to be for everyone, not just designers and hipsters, but everyday men and women. Apple is shifting its focus onto everyone, everywhere. We don’t discriminate.”
Pricing appears to reflect Cook’s sentiment and the iDrive has been priced at just $599.99. The official release date for the new system is 11:59PM tonight and can be purchased at Walmart and Apple stores across the country. Crowds have already started lining up at stores to get their hands on the device.
So, what’s next up for Apple in their quest for world domination? Cook says: “Apart from a windless wind turbine, we have something called iEyes in the works — a set of contact lenses that are connected to the web and let you track your and share your surroundings with your social media networks. Keep and eye out for it. No pun intended. Ha ha.”