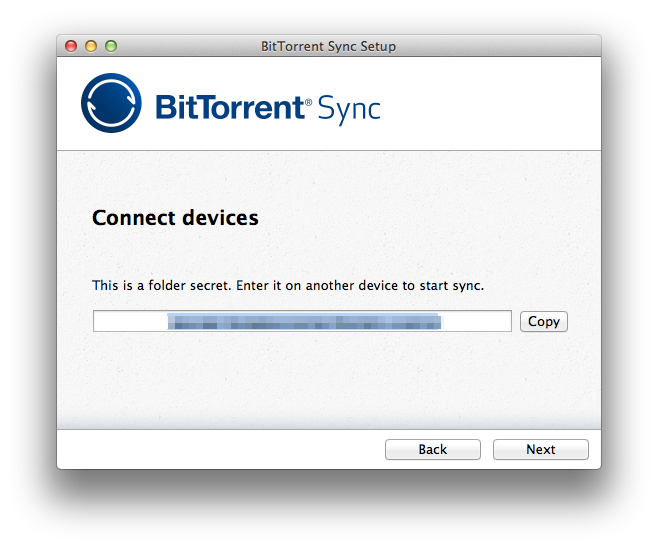 BitTorrent today released folder syncing software that replicates files across multiple computers using the same peer-to-peer file sharing technology that powers BitTorrent clients.
The free BitTorrent Sync application is labeled as being in the alpha stage, so it's not necessarily ready for prime-time, but it is publicly available for download and working as advertised on my home network.

BitTorrent, Inc. (yes, there is a legitimate company behind BitTorrent) took to its blog to announce the move from a pre-alpha, private program to the publicly available alpha. Additions since the private alpha include one-way synchronization, one-time secrets for sharing files with a friend or colleague, and the ability to exclude specific files and directories.
BitTorrent Sync provides "unlimited, secure file-syncing," the company said. "You can use it for remote backup. Or, you can use it to transfer large folders of personal media between users and machines; editors and collaborators. It’s simple. It’s free. It’s the awesome power of P2P, applied to file-syncing."
File transfers are encrypted, with private information never being stored on an external server or in the "cloud."
"Since Sync is based on P2P and doesn’t require a pit-stop in the cloud, you can transfer files at the maximum speed supported by your network," BitTorrent said. "BitTorrent Sync is specifically designed to handle large files, so you can sync original, high quality, uncompressed files."
In the pre-alpha testing that began in January, 20,000 users synced more than 200TB of data. BitTorrent Sync clients can be downloaded now for Windows, Macs, Linux desktops, and Linux-based network-attached storage devices. Mobile support will come later.
Setting the client up is easy. No account is required, but a randomly generated (or user-chosen) 21-byte key is needed to sync folders across computers. After installing the application and choosing a folder to sync you'll be given a string of random letters and numbers that should be typed into a second computer to sync the folder: