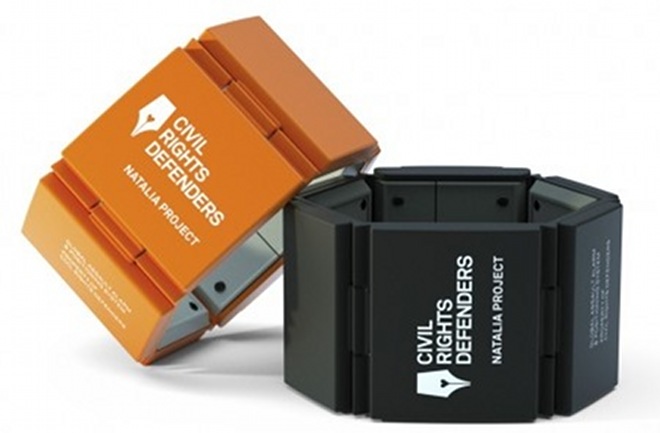 After Chechen rights worker Natalia Estemirova was kidnapped and murdered in 2009 for documenting the abuse of civilians by government-backed militias, a human rights group began design on a gadget that could better monitor at-risk workers in the field.
Civil Right Defenders recently announced its “Natalia Project” has come to fruition in the form of a smart bracelet that utilizes GPS and social media to alert of kidnappings or attacks within seconds. When triggered or removed, the bracelet uses a mobile signal to inform Twitter followers and
Facebook friends of an assault and transmits real-time satellite location data directly to the headquarters of Civil Rights Defenders.

In the case of Estemirova, who was murdered within 24 hours of being abducted, Civil Rights Defenders say her death could have been prevented had authorities been immediately informed of her kidnapping.  Developers believe the bracelet’s ability to provide instant alerts to such a vast solidarity network will put pressure on kidnappers to release their victims.
“The Natalia Project makes it easy for anyone to contribute to the safety of human rights defenders to allow them to carry on their crucial work, either showing strength in numbers, by ‘liking’ or following on social media, or by donating directly to support the ongoing work,” Robert Hårdh, Executive Director of Civil Rights Defenders, said in a news release.

The bracelets were unveiled last week at Defenders’ Days, the Civil Rights Defenders’ annual conference in Stockholm. Over the next 18 months, the fist stage of the project will commence with 55 human rights workers being equipped with bracelets. That is, if the project receives enough funding from sponsors and the general public. For more information, or to make a donation, check out the Natalia Project’s website.
via BBC
Credit: Civil Rights Defenders