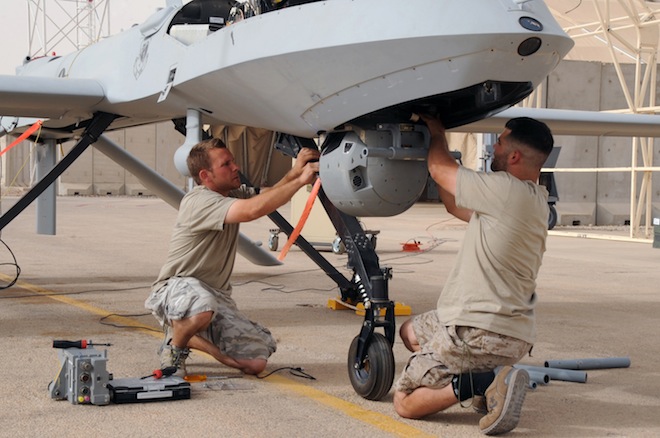 For all the ongoing hype about the U.S. military’s arsenal of flying robots, they’re anything but safe from budget cuts. Pentagon officials anticipate spending significantly less on their surveillance and attack drones over the next several years, effectively ending the drone boom of the previous decade.
The impending budget cuts are expected to affect each major funding source for the drones: the research and development accounts that keep new models coming online; the operations and maintenance accounts that keep current ones in the air; and the procurement accounts that keep the military purchasing them.
Already, the Pentagon is signaling that the boom times for drones are coming to an end, even as the robots
remain one of the U.S.’s signature counterterrorism weapons. An overview prepared in February by Dyke Weatherington, who oversees unmanned systems for the Pentagon’s acquisitions and technology directorate, outlined the downturn.
Across all the various military drone programs, R&D cash is expected to fall to $1.03 billion in fiscal 2017, nearly half of the $1.99 billion the Pentagon requested in the fiscal 2013 budget. Budget cuts caused the Pentagon to shrink its anticipated drone-research spending: Weatherington’s presentation, delivered to the drone advocates at AUVSI and acquired by Danger Room, anticipates spending $1.3 billion in fiscal 2014, some $866 million less than the fiscal 2012 budget anticipated for that year.

Same goes for procurement, and what’s known as “operations and maintenance.” Weatherington anticipated that the Pentagon will spend $3 billion on drone purchases in 2014, some $814 less than the fiscal 2012 budget foresaw. And he expected that it’ll want $983 million in fiscal 2014 to keep its current fleet flying and tuned up, down $309 million from the expectation in the fiscal 2012 budget. The downward pattern for all drone accounts continues through 2017.
It’s possible that the fiscal 2014 budget, expected to be released on April 10, will revise those numbers further. “We’re still looking at those numbers,” says Maureen Schumann, a spokeswoman for Weatherington. Pentagon officials have described the current budget process as chaotic, as it’s occurred against the backdrop of an ongoing White House-congressional feud over spending cuts.
But drone manufacturers and their advocates have been bracing themselves for the downturn for a while, even as the drones remain busy worldwide. Last year, the Air Force cut its drone purchases by half while actually upping the combat air patrols they fly. AUVSI has been pushing the utility of drones to farmers as the advocacy group sees the military market shrinking.
Every defense account is feeling pressure under mandatory budget cuts enacted by Congress. But some observers see the robots as being particularly vulnerable, as they don’t have the traditional bureaucratic constituencies of other weapons systems.
“As the Pentagon wrestles with declining overall budget numbers, this would be the time to not let sunk costs drive us in the future. But the reality is that in tough budget times, the new becomes more directly threatening to the old,” says Peter Singer, a defense analyst at the Brookings Institution. (Where, full disclosure, Danger Room boss Noah Shachtman has a non-resident fellowship.) “And in bureaucracies, the old is not only more established, but is often at an advantage. It is more likely to have existing internal constituencies and tribes, and stronger support from Congressional members protecting existing factories and jobs in their district versus the potential of future program offices and future pork barrel spending.”
Despite the anticipated budget cuts, there are still new, experimental drone programs under way in the military. The Navy is pushing forward with an effort to launch an armed drone from an aircraft carrier. Darpa wants drones to operate from the decks of even smaller ships. In Afghanistan, Army units are using a six-pound lethal robot that bridges the gap between drone and missile.
But the funding reductions are “all the more striking,” Singer says, because of the enthusiasm that senior military leaders have mouthed for the drones. “In the next 20-30 years these things are going to explode,” Gen. Mark Welsh, the Air Force chief of staff, told an airpower conference in September. (He meant that colloquially.) “Who knows what will happen next, but it’s going to be exciting to watch and our Air Force has to be in the lead because we’ll know the best way to use them. Innovation is what we’re all about.”
Weathering’s presentation pointed to a 33 percent reduction in drone funding in the coming years inside the Air Force alone.
“One is reminded a bit of that cavalry officer after World War I who is reputed to have said, ‘Thank goodness now the war is over, we can get back to real soldiering,” Singer says.
Credit:Wired.com