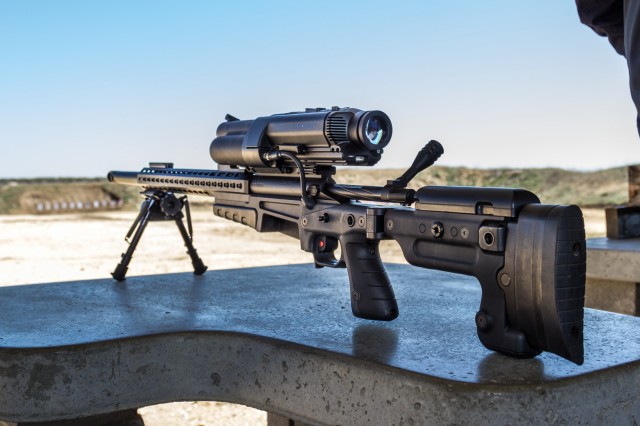 My photographer, Steve, squints through a computerized scope squatting atop a big hunting rifle. We're outdoors at a range just north of Austin, Texas, and the wind is blowing like crazy—enough so that we're having to dial in more and more wind adjustment on the rifle's computer. The spotter and I monitor Steve's sight through an iPad linked to the rifle via Wi-Fi, and we can see exactly what he's seeing through the scope. Steve lines up on his target downrange—a gently swinging metal plate with a fluorescent orange circle painted at its center—and depresses a button to illuminate it with the rifle's laser.

"Good tag?" he asks, softly.
"Good tag," replies the spotter, watching on the iPad. He leaves the device in my hands and looks through a conventional high-powered spotting scope at the target Steve has selected. The wind stops momentarily. "Send it," he calls out.
Steve pulls the trigger, but nothing immediately happens. On the iPad's screen, his reticle shifts from blue to red and drifts toward the marked target. Even though I'm expecting it, the rifle's report is startling when it fires.
A second later, the spotter calls out, "That's a hit!"
Steve has just delivered a .338 Lapua Magnum round directly onto a target about the size of a big dinner plate at a range of 1,008 yards—that's ten football fields, or a tick over 0.91 kilometers. It's his very first try. He has never fired a rifle before today.


Through the shooting glass

Of course, Steve isn't some kind of super mutant marksman—he had a bit of help. We were plinking targets with $17,000+ Linux-powered hunting rifles, made by a small Austin company called TrackingPoint. Earlier this year, Ars reported on TrackingPoint's "Precision Guided Firearm" at CES, where the 59-employee company was giving the press a sneak-peak at their product before its official introduction at the Shot Show convention a week later.
The Precision Guided Firearm is a "whole widget" type of thing—it's not just a fancy scope on top of a fancy gun, but rather a tightly integrated system coupling a rifle, an ARM-powered scope running a modified version of Angström Linux (with some custom BitBake recipes and kernel modules to support the rifle's proprietary hardware), and a linked trigger mechanism whose weighting is controlled by the scope.
TrackingPoint actually makes three different Precision Guided Firearms, two of which fire .300 Winchester Magnum rounds and one of which fires a larger .338 Lapua Magnum cartridge. The weapons themselves are crafted by Surgeon Rifles, and TrackingPoint adds the scope and trigger mechanism to the rifle and then sells it as a package. Since launch, TrackingPoint's sales have been very brisk: the company has nearly sold out of their entire allotment of PGFs for all of 2013.
You might be led to think that the lighter XS3 is the most popular of the three rifles, but TrackingPoint VP Bret Boyd actually says that they've sold more of the .338 LM XS1 than any of the other models. This makes sense: the XS1 has the longest effective range of the three PGFs, up to 1200 yards, and the type of customer able to purchase TrackingPoint's high-dollar products is also the type of customer who likely does a whole lot of hunting, at home and abroad. The XS1's versatility is likely worth more to that kind of buyer than its price difference (about $22,000, compared to the XS3's $17,000).

I've fired a small number of bolt-action rifles before, but nothing as big as the .338 LM-chambered XS1, on which we spent most of our range time. The oddest thing about firing TrackingPoint's rifles, the thing wildly different from a standard hunting rifle, is the trigger mechanism. The rifle's "Tag-Track-Xact" technology means that there is a delay between when you pull the trigger and when the rifle fires—sometimes several seconds of delay, depending on how steady your aim is. This disconnect between trigger pull and firing can be weirdly disconcerting.
All of the interaction with the rifle's computer is done through the computerized tracking scope, which displays an image of the world in front of the rifle, overlaid with data. It's reminiscent of a fighter jet heads-up display.
Through the tracking scope, you locate the thing you want to shoot, whether it's a metal plate like we were hitting on the range, a game animal, a tree, or whatever. You place the center reticle over the target and depress the red tagging button just forward of the trigger, which causes the tracking scope's range finder to briefly illuminate the target. The range finder is a powerful laser, rated at 75W and pulsed for an average power of 1mW, which measures the distance to the target in yards (1 yard is 0.9 meters, for metric readers) and displays that number in the upper left side of the scope's field of view. Once "tagged," the target gains a red pip. The scope image also reorients itself in a move that can be confusing the first few times it happens.
The reorientation is to take into account the "drop" of the shot. As demonstrated by MythBusters, a bullet is affected by gravity as it flies, losing height at the same rate as it would if dropped directly out of your hand. At 1000 yards, the bullet loses about 20 feet (6 meters) of height, and so when you tag a target with the tracking scope, the field of view immediately shifts down, by an amount proportional to the target's distance. This is so that the center of the scope accurately shows you where the round will go, rather than some point far above it. Someone firing a long-range shot with a traditional scope must make the same adjustment manually, but here the ballistic computer takes care of it.
Once the target is tagged, the laser ceases illuminating and the embedded system's image recognition routines take over. If the target is a game animal, the scope will track the animal's movement in the field of view, and the red pip will remain stuck to the point on the target where it was originally tagged. This level of precision obviously helps out at the range, but it also enables a hunter to more ethically harvest animals by precisely targeting specific areas—the tagging mechanism greatly simplifies the process of killing the game animal with a single shot, rather than wounding it and inflicting unnecessary suffering.
After the target has been tagged, the scope's reticle changes to a large blue "X," and the weapon can be fired. To actually send a round downrange to the target, you depress the weapon's trigger. This doesn't cause the weapon to immediately fire, though—the reticle turns red, and while keeping the trigger held down, you must align the reticle with the tagged pip. Once the pip and the reticle coincide, the weapon fires.