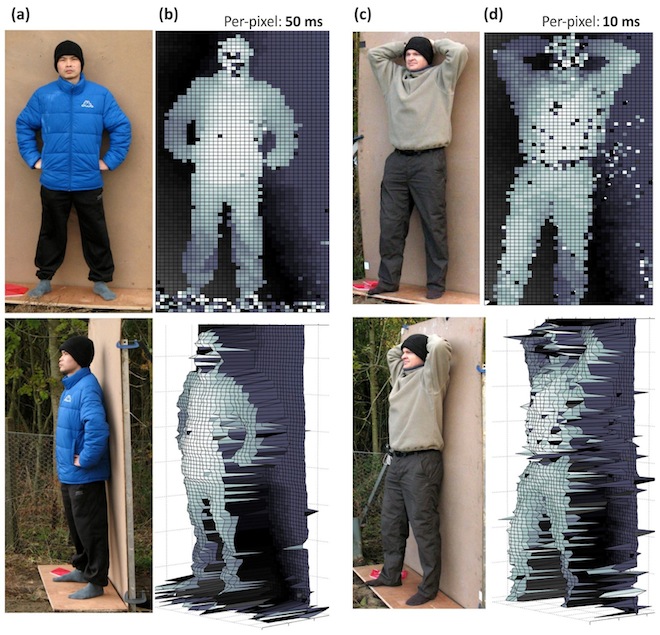 Using superconducting nanowires and lasers, a new camera system can produce high-resolution 3-D images of objects from up to a kilometer away.
The technology works by sending out a low-power infrared laser beam, which sweeps over an object or scene. Some light gets reflected back, though most is scattered in different directions. A detector measures how long it takes one particle of light, a photon, to return to the camera and is then able to calculate the distance from the system to the object. The
technique can resolve millimeter-size bumps and changes in depth from hundreds of meters away.
The new camera takes advantage of superconducting nanowires, materials with almost no electrical resistance that have to be cooled to extremely low temperatures. These superconductors are very sensitive and can tell when just a single photon has hit them.
“That’s the beauty of this system,” said physicist Gerald Buller of Heriot-Watt University in Edinburgh, Scotland, co-author of a paper on the system that appeared Apr. 4 in Optics Express. “Each laser pulse contains many photons, but we only need one photon to return for every 10 optical pulses.”

The technology is similar to LIDAR, a remote sensing technique that also uses laser light to measure the distance to different objects. By using infrared light, Buller’s camera is able to detect a wide variety of different items that don’t reflect laser beams well, like clothing. And the long-wavelength infrared light is safer than other lasers because it won’t harm people’s eyes when it scans them.
So what could this new camera be used for? Are Google’s Streetview cars now going to make drive-by 3-D models of every city? Will TSA agents figure out some new to watch you at the airport?
Buller said the technology could have a lot of different scientific applications. The system could be placed on airplanes and used to scan the vegetation in a forest, helping to determine the size and health of the plants. The team is also interested in making the camera work well underwater, which would allow people to scan the depth of oceans or lakes and determine their shape.
And the camera has obvious use in defense, for instance helping military drones better see targets in combat operations. The one drawback is that human skin doesn’t reflect infrared light well, so faces appear as black spots in the 3-D images. This offers a way to become invisible to the camera: Simply get naked.
“The superconducting detector has the potential to really be phenomenal,” said engineer Mark Itzler, CEO and CTO of Princeton Lightwave Inc, who was not involved in the work. It would probably find a wide variety of uses, he said.
But, he added, because superconductors have to be cooled to just a few degrees above absolute zero, it could be challenging to implement the technology. Buller agreed, and said his team was working to get the system to use more conventional semiconductors, like silicon, that would allow them to shrink the technology and better deploy it in the field.