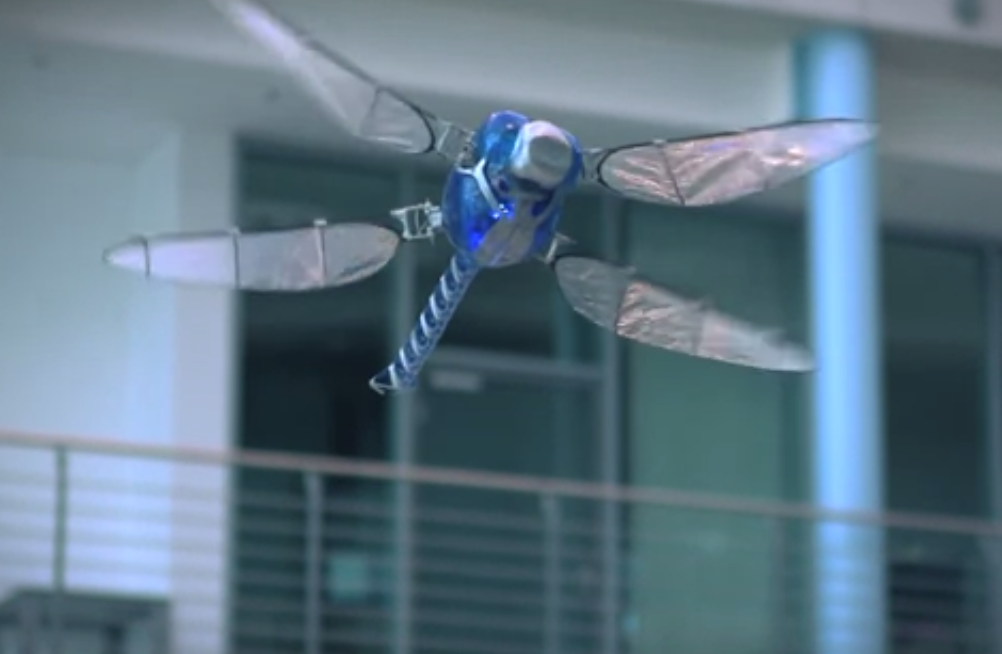 Festo has created a fascinating robotic BionicOpter dragonfly that has a semi-opaque blue body and four clear wings, which beat as it flies around the room, pausing as it glides and shifts direction, only to resume beating as the robot dives and rises. We have a video of the robotic dragonfly in action after the break, where you can see it demo’d in a large room. As described, the flight of a dragonfly is unique over, for example, birds, making it an appealing – and relatively difficult – subject for robotics. A dragonfly can move its two pairs of wings independent of each other, can
make sharp turns, go backwards, and speed up quickly. Festo undertook the challenge, and the result is the BionicOpter, which the company says is the first model capable of more flight conditions can a plane, glider, and helicopter all mixed together.
You can see all these flight conditions in action in the video above. Festo boasts that each wing is built with amplitude controllers, which allows it to operate independent of its counterpart wing and the other pair of wings, with both thrust intensity and direction being adjustable. There are adjustments for flight vibrations, and the robot is designed to be operational in both outdoor and indoor settings.
One of the most interesting aspects of the BionicOpter is that it can be controlled via a smartphone, with the controlling aspect being similar to flying a toy helicopter – only the direction needs to be changed. The software, sensors, and other hardware take care of the particulars, moving all four wings as necessary to achieve the direction needed in the environmental conditions where it is located.
[via Festo]