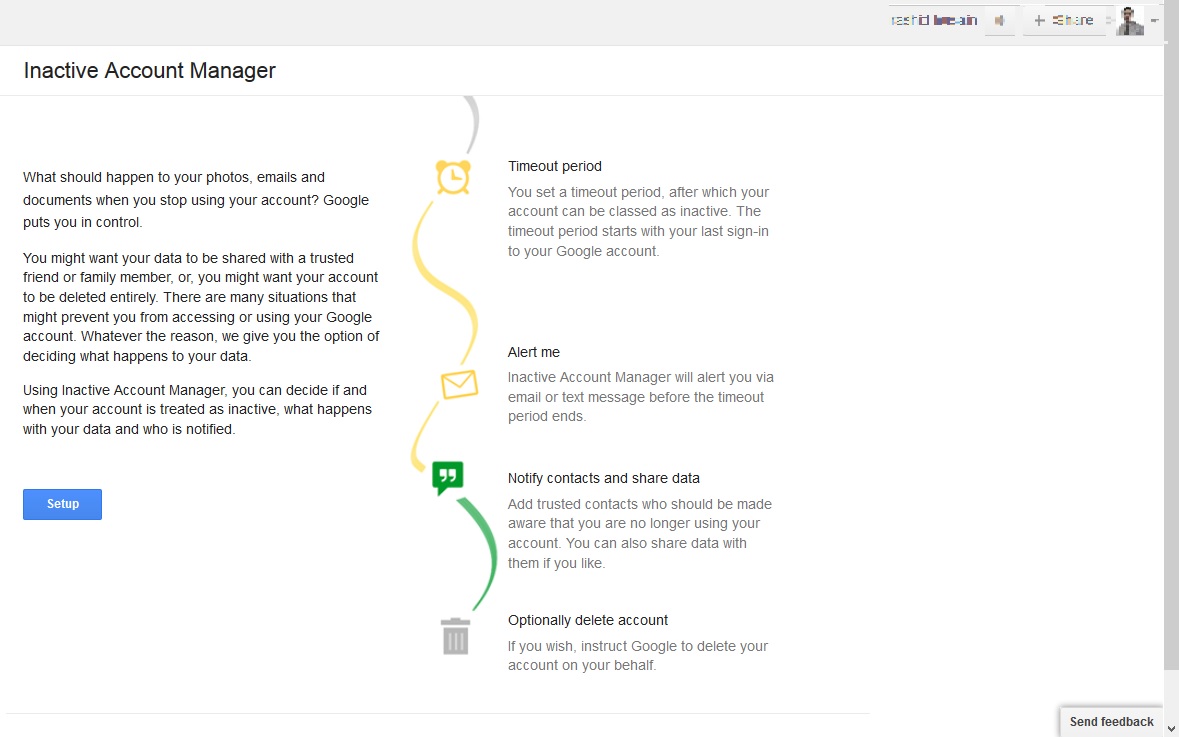 What happens to your e-mail, Facebook, Twitter and other digital accounts after you die has long been a question in the tech world. Some have even started to create a digital estates to pass on the keys to their digital lives to an executor or trustee.
But Google is now thinking ahead and making it easier for people to plan what happens to that digital data after you pass. The company has announced its Inactive Account Manager.
The tool allows users to decide what happens to their data on Google's services -- Gmail, Blogger, Google Drive, Google+, Picasa Web Albums, Google Voice and YouTube -- after they pass. You can decide to share access to those accounts with friends or family members or have the account deleted.
"You can tell us what to do with your Gmail messages and data from several other Google services if your account becomes inactive for any reason," Andreas Tuerk, the product manager of the service, wrote on Google's blog today.


Instead of someone informing Google of your death, the service uses inactivity as a barometer. You set the time of inactivity -- three, six, nine or 12 months -- and if you don't log into your account after that period Google will do one of two things. You can have it alert up to 10 trusted friends or contacts and choose to share your data with them or you can also just have it set to delete your entire account
Before the systems take any of those actions though, it will warn you via a text message or an email to a secondary address. Of course, if you have died you won't get that alert and it will then take action.
It might sound like a somber tool, but Google is now making it easier than many other services when it comes to planning for your death in the digital domain.
New Hampshire State Rep. Peter Sullivan introduced legislation in February to allow the executor of an estate control over the social networking pages of the dead. Five other states, including Oklahoma, Idaho, Rhode Island, Indiana and Connecticut, have established legislation regulating one's digital presence after death. Rhode Island and Connecticut were first, but their bills were limited to email accounts, excluding social networking sites. With other services, such as iTunes, some have started to set up digital trusts.
Beyond ownership, many services have popped up over the last couple of months that address the issue of sending messages via social media services after death. A Facebook app called "Ifidie" lets you set up a way to send out Facebook messages to friends after you pass.
You identify a trustee who will confirm that you have died, and the messages will be sent. _LivesOn is a Twitter service that will analyze your tweets, allow you to train it, and will tweet for you after you are gone.
You can now set up your Google Inactive Account Manager here.