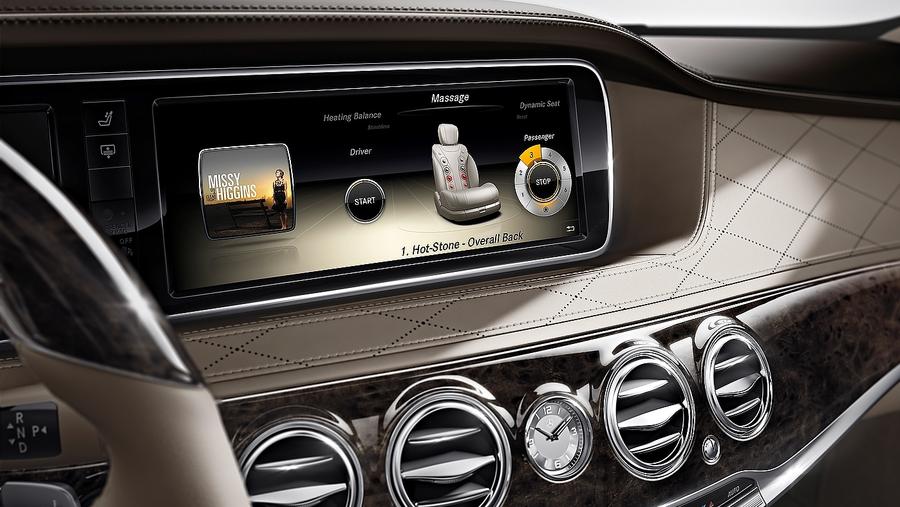 Mercedes has previewed the interior of its new S-Class luxury car. And it's dominated by a pair of foot-wide LCD panels. The new limo also gets Google-enhanced sat nav, a digital perfume system and much, much more.
In-car LCD screens have been gradually growing larger and larger in recent years. Tesla sticks a huge 17-inch panel in the Model S's dash, for instance.

But the big brands tend to be a bit more conservative about this kind of thing. So the new S-Class's pair of ultra-wide 8:3 aspect, 12.3-inch LCD displays is something a bit special.

One does the duties of the driver's instruments while the other serves up the infotainment features, including navigation, entertainment, vehicle information, apps and more.

Mercedes describes the screens as high definition but hasn't divulged the precise resolution. As with all previous Mercedes cars with the COMAND system, the screens are controlled with a rotary dial. There's no touch functionality.
What there is, however, is an optional pair of COMAND monitors for the rear seats. While we're on the subject of COMAND, it gets a major overhaul for the new S in the shape of 30 million new lines of code.

Which is just as well, COMAND was beginning to feel a bit clunky. What's more, increased processing power comes in the form of Intel's Atom processor, which should help drive those big screens smoothly.
The navigation, meanwhile, is enhanced by Google Maps technology and Merc's excellent Drive Kit Plus app interface for iPhones makes another appearance. All very impressive.

The smell of luxury

But wait, there's more. The climate control system can be optionally augmented with Air Balance. It's an air ionizer and filtering system that includes an active perfume system that subtly scents the cabin in carefully controlled cycles.
S-Class buyers can choose between four scents, freeside, sports, downtown and nightlife. No, we are not making this up.
Rounding out the headline interior tech is the obilgatory Bang and Olufsen sound rig cranking out a borderline offensive 1,500 watts of sonic fury.

And remember, this is just the interior tech. Mercedes will soon be revealing details of the new model's active safety systems and driver aids. Technological tour de force then? It's an overused phrase. But if anything qualifies, it's got to be this extraordinary new Merc.
The new S-Class is due to go on sale in May. Speeds and feeds are yet to be confirmed.