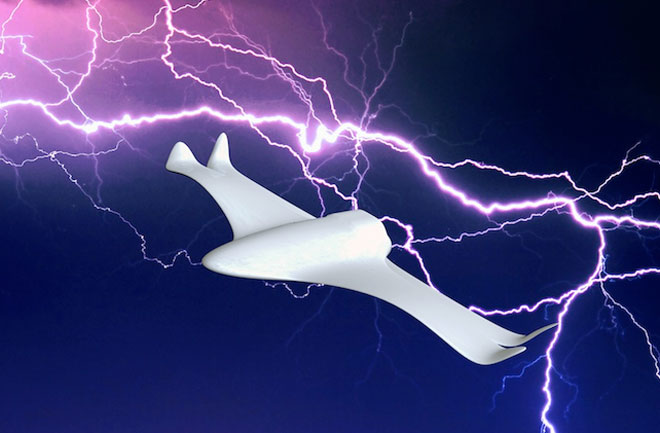 A simple (and cool) experiment that shows up in science fairs may one day power aircraft.
It’s called a “lifter” and it’s been around since the 1950s. Using electric fields it’s possible to generate thrust that can make objects float into the air. Researchers at MIT ran their own experiments and found such ionic thrusters may be a more efficient kind of propulsion than conventional jet engines.

In their experiments, they found that the so-called ionic wind produces 55 times as much thrust per kilowatt of energy used as a jet engine. The team published its results in the Proceedings of the Royal Society.The phenomenon is called electrohydrodynamic thrust, and it’s not that hard to make such a thruster at home. (Some videos of students’ projects can be found here and a how-to for building one here).
Take three sticks and arrange them upright in a triangle. Run a wire between the tops of all three and connect it to the positive terminal of a high-voltage, low current DC power source. Then take some kitchen foil and wrap a strip around the lower part of the sticks; connect that to the negative terminal of the same power source. You end up with a triangular contraption that looks a little like a box kite. Flip to the switch to the power and the contraption floats into the air.
It floats because the current running through the wire charges, or ionizes, some of the surrounding air molecules, building up a big positive charge. Those positively charged molecules are attracted to the negatively charged foil sheet.
The attraction causes the ionized air molecules to move from the wire to the sheet. As they do, they collide with neutral air molecules around them. The collisions are mostly downward, so the result is a flow of air — thrust — that makes the whole thing move upwards.
Only recently, though, has anyone looked into making it practical for real aircraft. Why? One problem is that the thrust per unit area is low, so the vehicle needs to be light.
Also, since the amount of thrust depends on the voltage, a large aircraft would need a lot of voltage. The science fair project version uses 30,000 volt power supplies (they aren’t so dangerous because the currents are small). A real airplane would need hundreds of thousands of times that. The researchers say in a press release that the engine might be close to the size of the airplane itself.
via MIT
Credit: Courtesy Steven Barrett