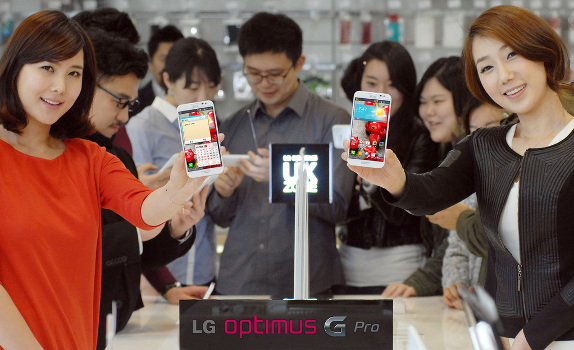 South Korea gave the Optimus G Pro a reasonably warm reception after debuting, and now LG's hoping to pull off a similar victory in Japan. Those in the Land of the Rising Sun can now pick up the smartphone from NTT DoCoMo. Though the handset bears the same name as its Korean counterpart, it forgoes a 5.5-inch 1080p display for a smaller 5-inch screen with the same resolution. In case you're in need of a refresher, the hardware runs Jelly Bean 4.1.2 on a 1.7GHz quad-core Snapdragon 600 Processor and 2GB of RAM flanked by a 3,000mAh battery,
13-megapixel rear shooter, 2.1-megapixel front-facing cam, 32GB of built-in memory and a microSD slot. LG still hasn't pinned down just when in Q2 the phone will launch in North America, but with a Japanese release behind it, a US arrival shouldn't be far off.