Microsoft Excel is the cause of global Economies crises? 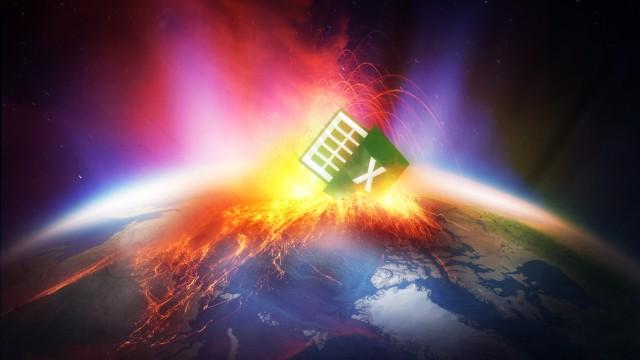 An economics paper claiming that high levels of national debt led to low or negative economic growth could turn out to be deeply flawed as a result of, among other things, an incorrect formula in an Excel spreadsheet. Microsoft's PowerPoint has been considered evil thanks to the proliferation of poorly presented data and dull slides that are created with it. Might Excel also deserve such hyperbolic censure?
The paper, Growth in a Time of Debt, was written
by economists Carmen Reinhart and Kenneth Rogoff and published in 2010. Since publication, it has been cited abundantly by the world's press politicians, including one-time vice president nominee Paul Ryan (R-WI). The link it draws between high levels of debt and negative average economic growth has been used by right-leaning politicians to justify austerity budgets: slashing government expenditure and reducing budget deficits in a bid to curtail the growth of debt.
This link was always controversial, with many economists proposing that the correlation between high debt and low growth was just as likely to have a causal link in the other direction to that proposed by Reinhart and Rogoff: it's not that high debt causes low growth, but rather that low growth leads to high debt.
However, the underlying numbers and the existence of the correlation was broadly accepted, due in part to Reinhart and Rogoff's paper not including the source data they used to draw their inferences.
A new paper, however, suggests that the data itself is in error. Thomas Herndon, Michael Ash, and Robert Pollin of the University of Massachusetts, Amherst, tried to reproduce the Reinhart and Rogoff result with their own data, but they couldn't. So they asked for the original spreadsheets that Reinhart and Rogoff used to better understand what they were doing. Their results, published as "Does High Public Debt Consistently Stifle Economic Growth? A Critique of Reinhart and Rogoff," suggest that the pro-austerity paper was flawed. A comprehensive assessment of the new paper can be found at the Rortybomb economics blog.
It turns out that the Reinhart and Rogoff spreadsheet contained a simple coding error. The spreadsheet was supposed to calculate average values across twenty countries in rows 30 to 49, but in fact it only calculated values in 15 countries in rows 30 to 44. Instead of the correct formula AVERAGE(L30:L49), the incorrect AVERAGE(L30:L44) was used.
There was also a pair of important, but arguably more subjective, errors in the way the data was processed. Reinhart and Rogoff excluded data for some countries in the years immediately after World War II. There might be a reason for this; there might not. The original paper doesn't justify the exclusion.
The original paper also used an unusual scheme for weighting data. The UK's 19-year stretch of high debt and moderate growth (during the period between 1946 and 1964, the debt-to-GDP ratio was above 90 percent, and growth averaged 2.4 percent) is conflated into a single data point and treated as equivalent to New Zealand's single year of debt above 90 percent, during which it experienced growth of -7.6. Some kind of weighting system might be justified, with Herndon, Ash, and Pollin speculating that there is a serial correlation between years.
Recalculating the data to remove these three issues turns out to provide much weaker evidence for austerity. Although growth is higher in countries with a debt ratio of less than 30 percent (averaging 4.2 percent), there's no point at which it falls off a cliff and inevitably turns negative. For countries with a debt of between 30 and 60 percent, average growth was 3.1 percent, between 60 and 90 it was 3.2 percent, and above 90 percent it was 2.2 percent. Lower than the low debt growth, but far from the -0.1 percent growth the original paper claimed.
As such, the argument that high levels of debt should be avoided and the justification for austerity budgets substantially evaporates. Whether politicians actually used this paper to shape their beliefs or merely used its findings to give cover for their own pre-existing beliefs is hard to judge.
Excel, of course, isn't the only thing to blame here. But it played a role. Excel is used extensively in fields such as economics and finance, because it's an extremely useful tool that can be deceptively simple to use, making it apparently perfect for ad hoc calculations. However, spreadsheet formulae are notoriously fiddly to work with and debug, and Excel has long-standing deficiencies when it comes to certain kinds of statistical analysis.
It's unlikely that this is the only occasion on which improper use of Excel has produced a bad result with far-reaching consequences. Bruno Iksil, better known as the "London Whale," racked up billions of dollars of losses for bank JPMorgan. The post mortem of his trades revealed extensive use of Excel, including manual copying and pasting between workbooks and a number of formula errors that resulted in underestimation of risk.
The paper's problems also highlight the value of peer review. Although the paper was included in the American Economic Review, it was included as a "Papers and Proceedings" article, taken from a conference and published without being reviewed. A peer reviewer might have sought the Excel spreadsheet at review time and could have exposed these flaws sooner. In turn, this may have prevented an apparently flawed paper from receiving the widespread attention that it got. The response is similarly unreviewed, so it too may be flawed. Via: ars technica