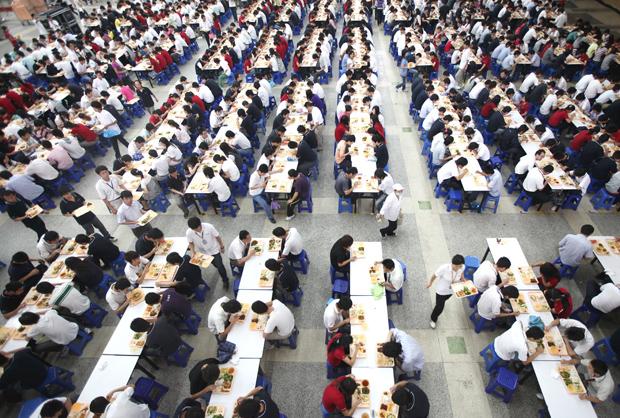 One company—Taiwan's Foxconn—makes a staggering 40 percent of the world's consumer electronic devices.
Starting now, Microsoft will be getting paid a toll on a large number of those devices. The company's long patent-licensing campaign has landed its biggest client yet in licensing Foxconn, formally named Hon Hai Precision Industry Co. Foxconn has agreed to take a license for any product it produces that runsGoogle's Android or Chrome operating systems.

The Redmond software giant has insisted for years now that any company making Android phones needs to license its patents. That campaign has generally been successful; so successful, in fact, that by 2011 Microsoft was making more money from patent licensing than from its own mobile phone system.
Now, Microsoft says that more than 50 percent of the Android phones in the world come from companies that have agreed to take licenses to its patents, including smartphone makers like LG, HTC, and Samsung. And that number is likely going to jump up today, as it announces that Foxconn, the Chinese company that makes 40 percent of the world's consumer electronic devices, has agreed to join its licensing program.
The details of the agreement remain undisclosed, although the press release makes sure everyone knows which way the money is flowing: Foxconn will be paying Microsoft, and not vice versa. The agreement will apply to all Android and Chrome OS devices made by Foxconn worldwide, including smartphones, tablets, and televisions.
Foxconn is an "original design manufacturer" or ODM, which is one of those behind-the-scenes companies that makes enormous numbers of devices, but never has its name printed on them. Microsoft is aggressively licensing its patents both at the OEM level (Samsung, HTC, Barnes & Noble, Acer, etc.) and the ODM level (licensing Foxconn as well as other companies you've never heard of, like Compal, Pegatron, and Wistron).
With the Foxconn deal in place, many Android devices will now be handled by two levels of companies, both of which have deals to license Microsoft patents. A source with knowledge of the deal explained that no device will be licensed more than once (which isn't allowed under patent laws, in any case). In situations where both the OEM and ODM has a deal with Microsoft, they'll work out between themselves who pays the license fee.
Foxconn is most famous for making iPhones and iPads, but the company has won significant contracts to make Android devices as well, including Amazon Kindles and Acer phones.
Going straight to the level of contract manufacturers could serve as a kind of end-run for Microsoft to get some licensing revenue even when the handset companies keep fighting. While Microsoft has struck deals with many Android makers, others, like Google-owned Motorola, continue to fight in court.
“We are pleased that the list of companies benefiting from Microsoft’s Android licensing program now includes the world’s largest contract manufacturer, Hon Hai,” said Horacio Gutierrez, the Microsoft VP who heads up the company's intellectual property group. “By licensing both brand name companies and their contract manufacturers, we have successfully increased the overall effectiveness and global reach of the program.”
“We recognize and respect the importance of international efforts that seek to protect intellectual property," said Samuel Fu, director of IP at Hon Hai. "The licensing agreement with Microsoft represents those efforts and our continued support of international trade agreements that facilitate implementation of effective patent protection.”