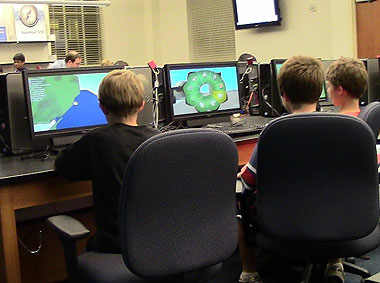 As part of its encouraging Imagine Cup, Microsoft is giving young ones that are aged between 9 and 18 the chance to enter a game design challenge dubbed Kodu. With a renowned Xbox controller being used as the main interface, Kodu will allow kids and teens to create games on a PC or Xbox "via a simple visual programming language" -- which allows them to virtually layout anything from sculpted landscapes and decorated trees, to creating their own scoring system, gameplay and, of course, characters. The Imagine Cup Kodu Challenge, as it's more formally known, is now open and will remain this way until May 17th, with the eventual finalists set to be awarded a trip to the event in St. Petersburg, Russia. The winners, meanwhile, could end up taking home a range of prizes, including grants, cash and other goodies -- but, perhaps most importantly, also the utmost respect of all other challengers present.