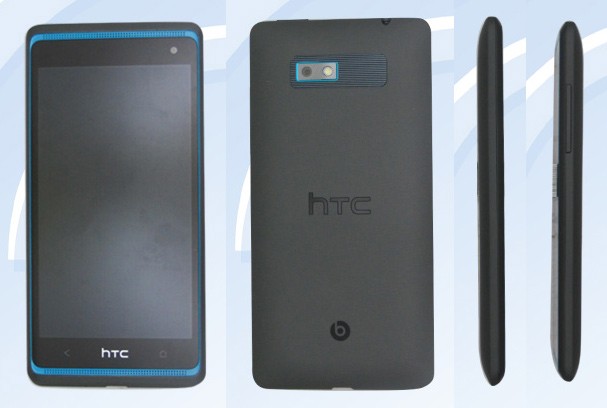 While the HTC One is facing much anticipation ahead of its launch in more regions, its price tags may not be everyone's cup of tea; but judging by the above leak, it looks like Peter Chou's willing to spare a couple of notable features for a more affordable model. According to last week's filing on China's TENAA database, the back of this 606w takes design cues from the China-only One SU (especially around the camera), but flip it around and you'll notice what appears to be a pair of front-facing stereo speakers (aka BoomSound as it's marketed as for the One), as well as the same dual soft key implementation on the company's latest flagship.
The rest of this Android 4.1.2 phone is a bit of a mix: there's a 4.5-inch 960 x 540 display, a quad-core 1.2GHz processor, 1GB RAM, an 8-megapixel main camera (so not UltraPixel), a 1.6-megapixel front-facing camera, WCDMA radio and microSD expansion. It's easy to see how these specs are carefully crafted to avoid directly clashing with the recently launched E1 (603e) as well: lesser front-facing camera but better processor and display here (presumably). And no, this is clearly not the rumored M4. As always, we'll keep an eye out for the 606w's official announcement.