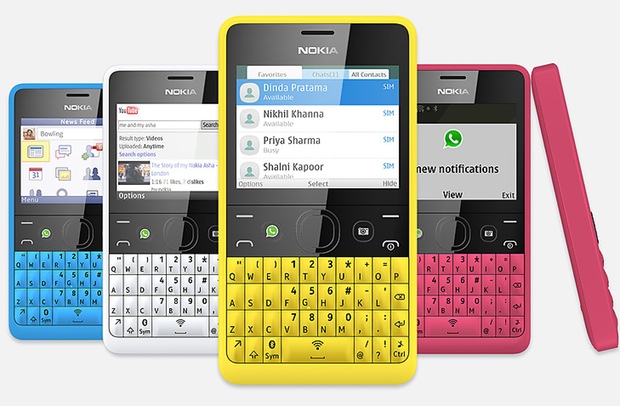 The last time we saw new members of the Asha family they eschewed the usual QWERTY keyboard, opting instead for a full touchscreen. The newly announced (and previously teased) Asha 210, however, returns to the more tactile input method, and brings a healthy splash of color (five different ones, to be precise) plus a dual-SIM option along for the ride. As before, social networks feature heavily, but the focus clearly remains on low-end and developing
markets. We know Nokia can do budget (and do it well), but is a full keyboard, a design update, and a dedicated WhatsApp button (all costing $72 SIM-free, excluding taxes when it lands late Q2) enough to make it appeal to anyone beyond the entry-level social addicts? Nokia was kind enough to show us the devices first hand, so head on past the break to see if we thought so. 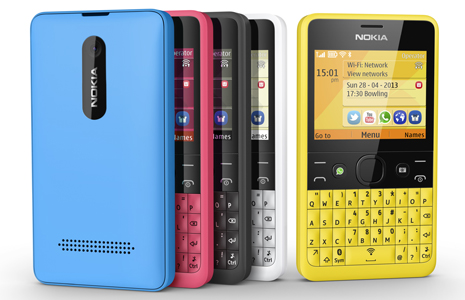 The first thing you notice here is the design language. As with the budget 105 and 301 offerings from MWC, the Asha 210 owes a lot of its looks to the current flagships, with more than a whiff of Lumia about them. This influence also spills over into the color options, which include the usual cyan, magenta, yellow and black plus white. We have to say that for a phone at this price point, it really isn't bad looking. The finish is soft-touch plastic, and while it's not one piece of polycarbonate, Nokia's at least gone to some efforts to make it look slightly similar, and we're happy to play along. The casing is designed to appear as seamless as possible, and the phone looks all the better for it. As well as that dominating QWERTY, there are menu and navigation buttons above and below dedicated WhatsApp and camera keys. Nokia was very keen to play up the WhatsApp integration which not only provides quick access to chats, but includes use of the service for free, for life (i.e. no annual fee).
A slight twist here is that in some markets, the Asha 210 will actually have a dedicated Facebook button instead (as we saw with the Asha 205). We've asked for confirmation on which markets will have which, but we understand that broadly speaking the EU and USA will likely come with blue stripes, while the others should get green. We also asked if this button might be configurable, but it appears not. Whichever social network flag you fly, it still won't take you very long to get there, as the (Symbian S40) software it runs on has been set up to put them all front and center on the homescreen anyway, with WhatsApp, Facebook and Twitter coming pre-installed. While we're on software, as before there's a "premium" download pack of 15 apps and games on offer after purchase, full details of titles to follow. 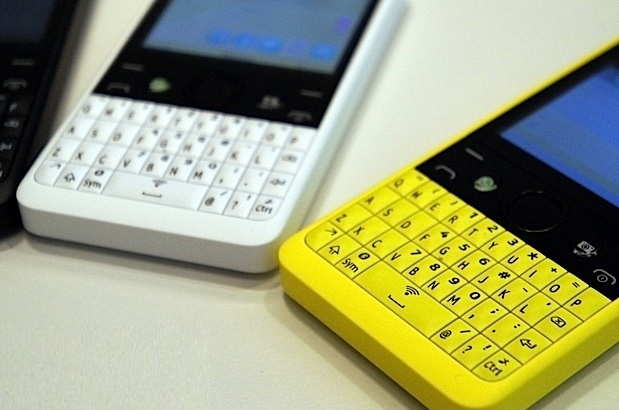 As for the rest of the hardware, it's something of a mixed bag. The main thing to note is that we're still running on 2G, so no 3G / HSPA to ease the deluge of all those tweets and messages you're expecting. But, there is WiFi to ease some of that pain. The rear (and only) camera is 2-megapixels, which is quite a jump up from the 205's meagre VGA shooter, and should make good use of that dedicated button. The lack of a front-facing camera might initially turn the confirmed socialite a little sour, but don't worry, you can still take those all important "selfies" with the clever self-portrait mode that we also saw in the 301 (the one that says "left a bit, right a bit"). Nokia played down our requests about what was running under the hood, and while it's always nice to know, at this price-point RAM and processor speeds are likely not the buyer's primary concern. We do know, however, it's lingering somewhere under the 1GHz mark.
The software, it has to be said, does feel noticeably slow if you've ever played with a modern smartphone. Pressing the WhatsApp key took a second or two for the app to open, and generally navigating with the buttons (no touchscreen here) will test your patience unless this is the most premium phone you've ever had -- something that might actually be the case for much of its market. However, this may improve between now and when it finally hits the stores nearer to summer. On the upside, Nokia claims that you'll get 12 hours of talk, and over 40 in standby (under optimum, lab conditions) to give you plenty of time to do everything.
Overall though, in the hand the phone feels light, yet solid. The bright color design is attractive and the keys all have a firm, responsive action, though perhaps a little clustered for those with larger digits. Most of all, at $72 (for both the single- and dual-SIM version), it's feels mean to pick fault with some of the Asha 210's features. The design is great for this price, the social features will please many, and there's just about everything you might need for photos and sharing. The UI may feel a little sluggish, and the continued lack of 3G will write it off completely for many, but for mobile users starting at the lower rungs, who want a well built phone with core functionality, Nokia's made a very reasonable proposition.