PayPal seeks to break US shoppers' swipe habit in stores 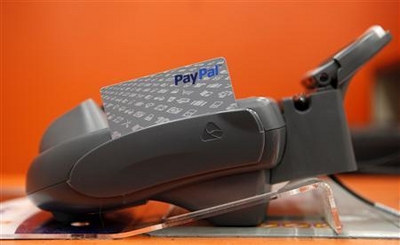 PayPal will soon be ubiquitous in U.S. retail stores, but just being there may not be enough.
The online payment service will take a giant step beyond its Internet roots on April 19, when a partnership with Discover Financial Services officially kicks in. The deal means that, by the end of this year, PayPal will be accepted as a payment option in roughly 2 million retail stores that already take Discover credit cards.
For parent eBay Inc, PayPal's expansion is crucial. The 13-year-old payment service accounts for about
40 percent of eBay's revenue and its growth is slowing. A foothold in physical payments, a $10 trillion market roughly 10 times the size of online transactions, could power longer-term growth.
But a nagging question hangs over PayPal's push to checkout counters: how can it convince consumers to try its new payment method when swiping a credit or debit card is so easy?
"Consumers need to be convinced they need a single digital wallet or card that links to all their other cards," said Rick Oglesby, a payments industry analyst at Aite Group, which provides research to financial services clients. "That's a huge mindset shift and the average consumer wonders why they would need it."
PayPal has been testing its physical payments service at Home Depot Inc stores since early 2012. At the checkout counter, shoppers can use PayPal by typing in a mobile phone number and a four-digit PIN that has to be set up online beforehand. They can also use a PayPal card that links to their account.
PayPal's uphill battle becomes clear from interviews with employees at the Home Depot store in San Carlos, California, one of the first to test the new service. Cashiers there said very few customers chose to use PayPal - and some who did soon gave up because they found keying in a bunch of numbers was not as convenient as swiping a credit card.
"I ask at my local Home Depot and I get the same response - not many people have used it," said Brian Kilcourse of RSR Research, a consulting firm focused on retail technology. "Unless there are specific benefits that consumers can touch and feel, they're unlikely to adopt something new."
Don Kingsborough, the PayPal executive overseeing the offline push, said the company will soon be releasing an updated smartphone app that makes it easier for consumers to enroll in the program. PayPal will also be sending out new PayPal cards to users who still prefer to swipe.
Kingsborough said he expects the cards to be used a lot at first, but they will be slowly replaced by the app as more stores set up mobile payments and shoppers get comfortable using their smartphones to make purchases.
"An average credit card user uses the card 18 to 20 times a week. For us to get to those kinds of levels will take time," he said in an interview. "But by Christmas PayPal will start to be a more prevalent way to pay."
Rivals
PayPal's offline initiative is in part a response to stiffening competition in the payments market.
Square, a mobile payments start-up headed by Twitter co-founder Jack Dorsey, is used by more than 300,000 merchants and has struck a partnership with Starbucks. Credit card giants Visa Inc and MasterCard Inc are working on their own digital wallets. These companies declined to comment on PayPal's expansion.
When people pay with PayPal, the purchases are often funded by credit cards. That means PayPal pays huge amounts of fees to Visa and MasterCard, making it a valuable partner. However, as PayPal expands into physical stores it will be more of a rival because it can forge closer ties to consumers and distance them from the credit card networks and card issuers.
Morgan Stanley analyst Scott Devitt told investors on Thursday that he was not increasing his PayPal estimates because of this new business. In his best-case scenario, Devitt estimates the initiative could boost the value of eBay by $5 a share, assuming about 5 percent of PayPal U.S. customers would complete about half of their offline transactions via the service.
"The road to merchant ubiquity is clear; consumer adoption is less so," Devitt wrote in a research note.
ebay shares were trading at $57.94, up 64 cents or 1.12 percent. Devitt's price target for the shares remained $62.
PayPal originally caught on online because it offered users an easy way to pay for goods without having to type in personal information, like credit card numbers and addresses.
In the physical world, this advantage no longer applies. That forces PayPal to attract customers through a mix of financial incentives and small fixes for what it calls "consumer pain points," or irksome shopping experiences.
For example, Home Depot and PayPal have run several promotions in recent months, offering $5, $10 or $25 rewards to users who spend a certain amount in-store with PayPal. One such promotion was expected to last two weeks but proved so popular that it lasted only 30 minutes before the budgeted reward money ran out, Kingsborough said.
Home Depot is also working with PayPal to improve customer service. One possible solution would help contractors track the money they give plumbers and other specialists to buy equipment for a project.
At Jamba Juice, customers can use PayPal smartphone apps to order and pay for smoothies, then pick them up from a dedicated line. PayPal ran a similar test with McDonald's in France last year.
The new smartphone app will also let diners order and pay without waiters approaching their table. And another solution PayPal is testing allows users at stadium events to order and pay for food and drinks from their seats.
Retailers are interested in working with PayPal because it may give them leverage to negotiate better terms with the likes of Visa and MasterCard. PayPal is also offering to share more valuable customer data with merchants.
Kingsborough said he hopes to turn PayPal into a kind of digital Swiss Army knife: "It solves so many of your problems that you're willing to carry it."