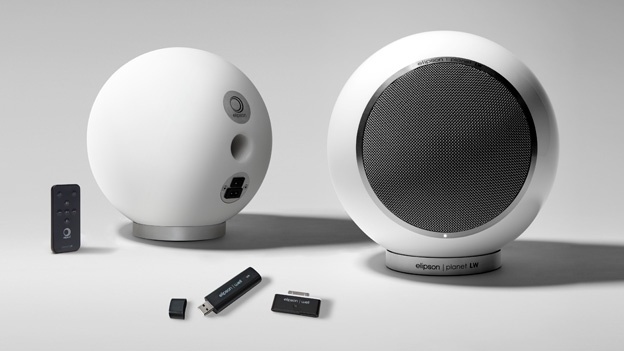 There's docks, there's high-end docks and then there's the Elipson Planet LW wireless amplified speakers, and it's probably important from the start to define exactly what these things are. All the audio played through these weighty creations is done so without any physical connection.
Like the B&W A5 or Philips AW9000, your music is locally streamed; the difference, much like Sonos, however, is that this is done neither using AirPlay nor your home network. So, just how does Elipson
think it can get away with charging £1200 for the privilege when the competition runs at more like half the price? The answer, it turns out, is all down to class... 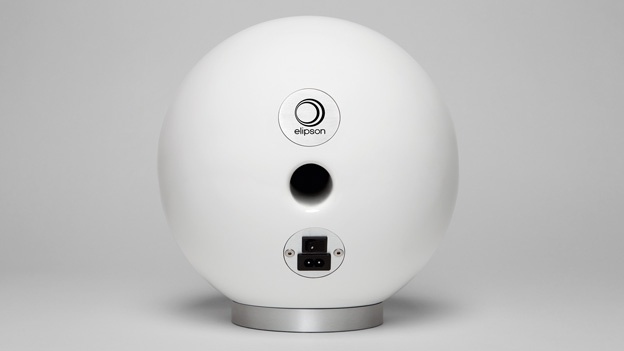 Like a large set of bowling balls and just as heavy, the Elipson Planet LW powered wireless speakers will be quite the sight on any desktop or in any living room of the world.
There's something undeniably Bang & Olufsen about the intent - down even to the amps within - but having a pair of 11cm grilled spheres staring at you in your choice of white, red or black is not going to be for everyone out there.
Some will love the stark spherical design; some will hate it, but what's impossible to argue with is that this speaker system is very well made. They're solid, simple and look as expensive as they indeed are.

Out of the box, you get a set of brushed aluminium rings for these globes to rest upon (how else would you expect them to keep still?) but, for an extra accessory outlay, you can pick up a set of floor stands, invest in a wall mounting kit or even have the swinging from the ceiling, provided your plasterwork is up to the task.

Each speaker is powered separately direct to the mains through the AC sockets at the rear and there's little else to find next to them save a hard on/off rocker switch and bass port. There's no other line in or out, so you can forget about wiring them together with any additional audio set up you might have, and that might put some people off.

The Elipson Planet LW speakers are all about ease of use. It's the Apple market that's very much in mind even if they are PC compatible. Included with the pair are two vital accessories in the shape of wireless dongles adapted to the 30-pin connector and one for USB too.
Once plugged into an iPhone, iPod, iPad, PC or Mac, they automatically set up their own dedicated network between the speakers and your device from which they can stream - uncompressed - whatever audio you'd care to play; be that music, the sound from a film or even the other end of a phone call. 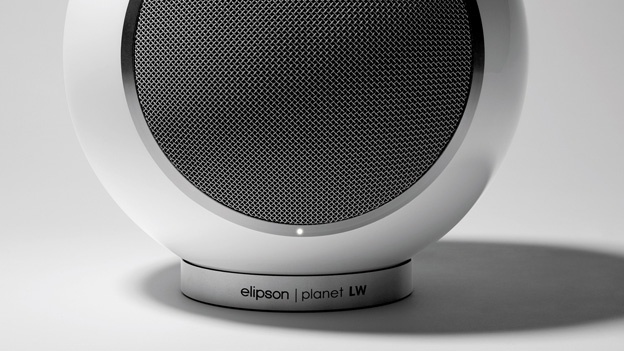 What's most impressive about these speakers over the likes of the Sonos set up or the Philips Fidelio streamers is that they just work. There's no configuration, no pairing, no calibration or even any kind of special app involved. You plug in the dongle, hit play and that's it; cue one sound-filled room.

In fact, you don't even have to bother with your PC or Apple device any longer if you don't want to. The Elipson Planet LW speakers come with a wafer thin remote control that's compatible with any kind of player we tried to throw at it. You can skip tracks, change the volume and turn the speakers on and off no matter what software you're trying to talk to.
The reliability of the remote isn't perfect - you have to make quite a pointed press - but it certainly works.

Each of the speaker orbs is as heavy as it is thanks mostly to the 50W, Class D, Bang & Olufsen ICEpower amplifiers housed within. They're the force behind the set of 6.5-inch mid/bass drivers and the fabric dome tweeters that dish out the audio, and what audio it is.

The sound is well balanced and a treat pretty much from top to bottom. It's still very much a consumer-grade sound, but a very good one at that. There's certainly enough richness and depth to out-manoeuvre any portable wireless speaker solution you might have and it'll flatten any kind of mini-system hiding in your kitchen.
If there's any criticism it would be that there's just a hint of detail that you suspect might be absent. It's not enough to worry about and certainly not enough to stop anyone buying these. Ultimately, the sound is probably what you'd expect to hear from a set of £500 speakers attached to a decent amp and source. They're very good but not reference level.

Interestingly, where they really shone in our tests was when supporting a film played on a laptop. It turned what was an already impressive 17-inch computer experience into a proper home cinema feel.