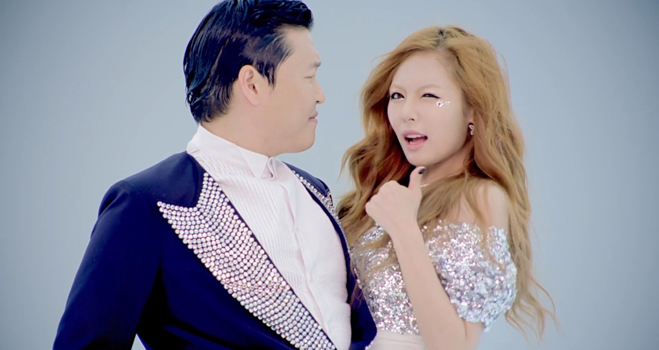 "Gangnam Style" star Psy's new music video has garnered 200 million views on YouTube in the nine days since its release and smashed YouTube's record for single-day hits.The video of "Gentleman" the much-anticipated follow-up to the South Korean singer's global hit reached the 200-million milestone Monday after its April 13 debut, YouTube said in a statement.
"From a stats perspective, it's one of the biggest music video launches the web has ever seen," the statement said.

The video recorded 38.4 million views on April 14, destroying the previous single-day record of 31 million views set by "KONY 2012" a documentary about a Ugandan warlord made by the charity group Invisible Children.
It was the video of "Gangnam Style", and in particular Psy's signature horse-riding dance, that pushed him to global stardom after it was posted on YouTube and turned into a viral sensation.
A satire on the luxury lifestyle of Seoul's upscale Gangnam district, it has become the most-watched YouTube video of all time, registering more than 1.5 billion views since it debuted last July.
The "Gentleman" video shows Psy, wearing his signature shades, performing his new hip-swinging dance at various locations in and around Seoul including a high-end clothing store, restaurant and a swimming pool.
The storyline features the 35-year-old singer playing pranks on women such as pulling their chairs away or untying a woman's bikini top at a swimming pool.
The new dance song was ranked Tuesday in the top 10 on iTunes music stores in a number of countries including Britain and Canada and 12th on the US Billboard's Hot 100 music chart.
It also helped earn Psy six nominations for the 2013 Billboard Music Awards to be held in Las Vegas in May, including top dance song, top streaming song and top new artist.