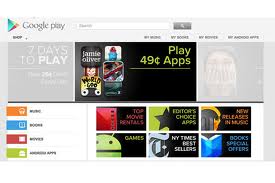 80 of the 100 top-grossing Android apps in Google Play store are free to play. The UK Office of Fair Trading (OFT) is investigating free-to-play mobile and Web games to see if children are "unfairly pressured or encouraged" to buy expensive in-game extras.Offering a game for free—but charging for further content in-game like extra levels, power-ups, and accessories—is an extremely popular business model for many companies. Currently, 80 of the 100 top-grossing Android apps on the Google Play store are free-to-play but make their money with in-game purchases.

The OFT's statement reads: "The OFT investigation is exploring whether these games are misleading, commercially aggressive, or otherwise unfair. In particular, the OFT is looking into whether these games include 'direct exhortations' to children—a strong encouragement to make a purchase, or to do something that will necessitate making a purchase, or to persuade their parents or other adults to make a purchase for them. This is unlawful under the Consumer Protection from Unfair Trading Regulations 2008."
There are numerous reports of children running up large bills without their parents' knowledge. Wired.co.uk reported in March on an eight-year-old boy who racked up a bill of £980 (roughly $1500) for virtual donuts on The Simpsons: Tapped Out for iPad. The boy's parents only realized when their monthly phone bill came through, with purchases on it ranging from £1.50 ($2.30) to as high as £75 ($115)—for donuts, remember, that aren't even real.
Apple agreed in this case to refund the bill, a decision that the company usually makes on a case-by-case basis. In the US, Apple was forced into a settlement in a class-action suit brought over what were labeled "bait apps"—if someone could prove that a minor made an in-game purchase without permission from the responsible adult, the money could be reclaimed in either cash or iTunes credit.
That's just a US case, but the OFT's investigation could see a similar case resulting in the UK depending on what evidence is uncovered. The OFT has asked parents to write in "with information about potentially misleading or commercially aggressive practices they are aware of in relation to these games." The contact page is on the OFT's site.
Games companies are also being contacted for information on how they advertise in-game purchases. The OFT's Cavendish Elithorn said: "We are concerned that children and their parents could be subject to unfair pressure to purchase when they are playing games they thought were free, but which can actually run up substantial costs.
"The OFT is not seeking to ban in-game purchases, but the games industry must ensure it is complying with the relevant regulations so that children are protected. We are speaking to the industry and will take enforcement action if necessary."
The report of the OFT's findings is due to be published in October 2013.
This story originally appeared on Wired UK.