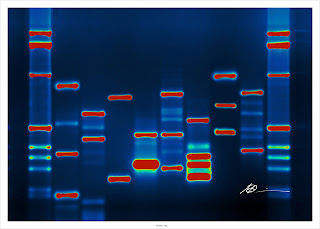 The basic premises underlying gene expression—when and where genes are turned on and off—were worked out in bacteria by François Jacob and Jacques Monod in the middle of the twentieth century. The expression of a gene typically relies on one or more proteins binding to a specific DNA sequence near the gene of interest. These proteins are called transcription factors since they regulate the transcription of genes into RNA, the first step in turning them into proteins.At this point, many different families of related transcription factors have been defined. And, as more and more genomes have been sequenced, it was easy
to get the impression that we had a complete catalog. But now, researchers at UCSF have discovered a new type of never-seen-before DNA binding protein in an organism called Candida albicans.

C. albicans is a fungus. It is a strain of yeast that resides in our guts, usually on very peaceable terms with the bacteria that make up our microbiome. Occasionally, it oversteps its bounds to cause thrush, an infection of the mouth. It can also infect other dark, moist, bodily orifices. (Especially if you spend all summer in a wet bathing suit.)
These yeast can be “white” or “opaque." These two states have the same genomes, but they look different because they express a different set of genes—much like differences between human skin cells and human muscle cells. White cells beget white cells, opaque cells beget opaque cells, and random switching between the two types happens only once in 10,000 generations.
There are five transcriptional factors known to regulate white-opaque switching. But this group at UCSF thought that might not be all. So they looked for genes that (a) were expressed only in opaque cells that (b) contained a DNA sequence that one of these five known factors could stick to.
They found only one gene that fit both criteria; they named it WOR3 (white-opaque regulator-3). When they put WOR3 into white cells, it made them turn opaque. When they deleted it, opaque cells stayed opaque at temperatures that generally get them to turn white. So this gene promotes opacity, which none of the other five regulators do.
And, like the other five regulators, the WOR3 protein binds to specific DNA sequences. This was a bit of a surprise, since it does not resemble any other DNA or RNA binding proteins. Proteins similar to WOR3 were found only in closely related fungi, so it probably arose fairly recently in evolutionary terms—about 300 million years ago. (Yes, from an evolutionary perspective, that's relatively recent.)
As the authors themselves admit, without a three dimensional structure of the protein, it is difficult to know if it really binds DNA in a unique way. It may be that the order of the amino acids that make up the protein is different from anything we know of, but it can still fold up into something that looks familiar.
They note that, besides the obvious part about a brand new DNA binding protein, their most important insight is that there are still new things out there to be discovered. Just because we know about a lot of proteins, DNA sequences, and mechanisms of transcriptional regulation, we shouldn’t get complacent and think that we know them all.