Comedy site FunnyorDie has released its comedic Steve Jobs film, iSteve, on its website, the first of a handful of Jobs films planned for release this year. The 78-minute film was slated for release on April 15, but FunnyorDie delayed it for two days following the Boston Marathon bombing on Monday. It's now available in its full glory on FunnyorDie's website, starring "Get a Mac" actor Justin Long as Steve Jobs. 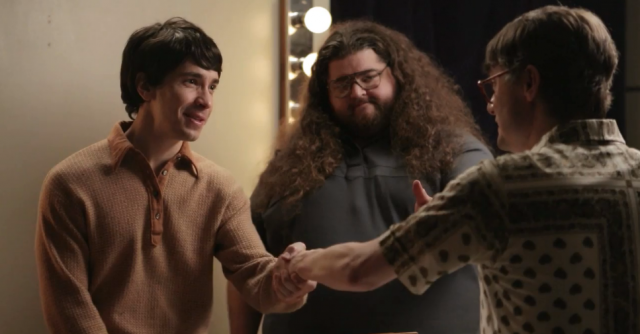 As we mentioned earlier this month when FunnyorDie released its iSteve trailer, the script was written in only three days, and the film itself took a mere five days to film. This may not be a Hollywood blockbuster, but FunnyorDie says iSteve is the longest project the site has worked on to date. The goal was to produce an amusing take on Steve Jobs' life before two other more serious films made their way into theaters. One
such film is the much-anticipated Jobs starring Ashton Kutcher—originally set to be released on April 19, but reportedly pushed back for more marketing. The other is a three-scene biopic penned by screenwriter Aaron Sorkin, which has yet to commit to a release date.
We here at Ars have not yet watched iSteve, but our friends at TUAW have. Describing it as "uniquely comedic, if not inaccurate," the site says FunnyorDie's film is indeed amusing but also "meta." If you set aside an hour of your day to take a look, let us know how it goes in the comments. It's free, after all, so pull up a fake Excel spreadsheet as a cover for when your boss walks by and check it out.