We joke that Gmail holds the record for the most drawn-out test phase, but Swype comes close: the keyboard replacement has been considered a work in progress on various platforms since before Android devices hit the streets, and well after it started shipping with phones. The developers at Nuance are a little braver as of today, as they're launching Swype 1.5 for Android without any kind of beta label attached -- they really, truly consider it
done. Mind you, there won't be a huge difference versus recent betas. The 1.5 update adds a quick shortcut to Dragon Mobile Assistant for those who have it installed, expands Living Language to 20 dialects, adds two new themes and refines both Smart Touch and Smart Reselect. 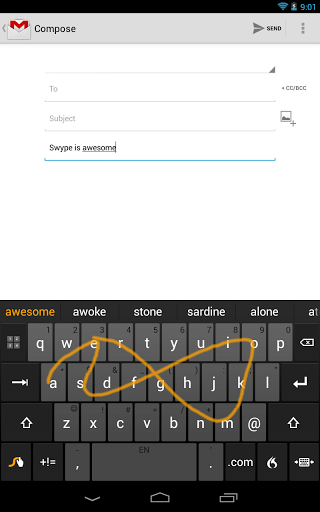 It's where you can get Swype 1.5 that may be the biggest change. For the first time, Swype is launching as a straightforward Google Play download that should support the same easy installs and upgrades as most Android releases. Unfortunately, that also means a price tag for the store edition. Nuance is charging 99 cents on Google Play for a "limited time" before a price increase, so we'll have to shell out if we want to take the easier path. The beta program remains intact, however -- and when Swype is at least temporarily undercutting SwiftKey on pricing, we'd at least consider spending some cash.