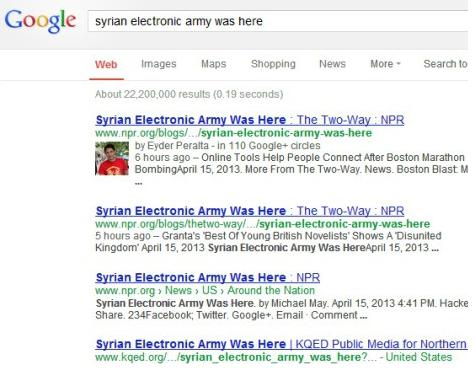 NPR's Web publishing system and several of the news agency's Twitter accounts were hacked yesterday by a group supportive of the Syrian government that calls itself the "Syrian Electronic Army." "Late Monday evening, several stories on the NPR website were defaced with headlines and text that said 'Syrian Electronic Army Was Here,'" an NPR statement published in a NPR.orgnews story on the incident said. "Some of these stories were distributed to and appeared on NPR Member Station websites. We have made the necessary corrections to those stories on NPR.org and are
continuing to work with our Member Stations. Similar statements were posted on several NPR Twitter accounts. Those Twitter accounts have been addressed. We are closely monitoring the situation."
Sophos's Naked Security blog published a summary of the hack, including a screenshot of a Google search showing some of the headlines edited by the Syrian Electronic Army:

The Syrian Electronic Army's Twitter account stated, "We will not say why we attacked @NPR ... They know the reason and that enough #SEA #Syria." Sophos notes that "[t]he motive for the hack is unclear, although it's likely that the hackers have not been impressed with NPR's coverage of the situation in Syria." This seems to be supported by another Electronic Army statement on Twitter saying "you can ask @deborahamos" why the hack occurred. NPR's article notes that "NPR's Deborah Amos has done extensive reporting about the conflict in Syria and in the course of her reports has told of the hard toll the fighting there is taking on the Syrian people."


The hackers also posted a screenshot of an internal NPR e-mail informing editors that the publishing system had been compromised and that "several stories were hacked." The screenshot appears to show an NPR employee's e-mail inbox. We've asked NPR if its e-mail system was compromised as well and will provide an update if we receive one. (UPDATE: NPR replied to us, but declined to offer any further comment.)

According to Sophos, "it's not the first time that the Syrian Electronic Army has made headlines in the computer security world. Last month, for instance, the group—which is said to support Syrian President Bashar Assad's regime—hacked into the official BBC Weather Twitter account and posted a series of bizarre messages." Al Jazeera's website was also attacked by the Syrian Electronic Army in January 2012.