The Terrible Truth About Toddlers and Touchscreen 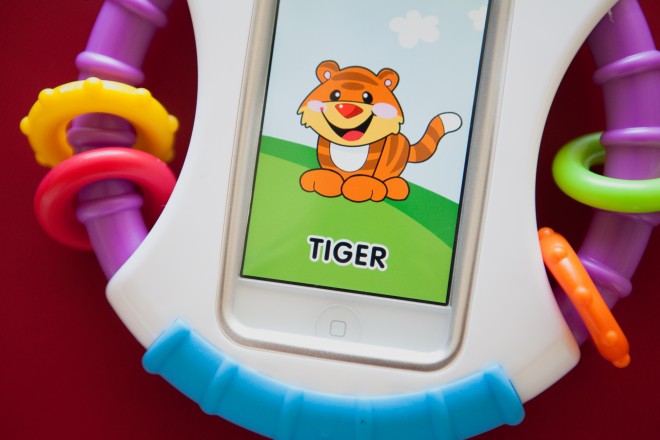 I saw this thing on Christina Bonnington‘s desk and it filled me with a dull, cold dread. It’s the Fisher Price Apptivity Case, a toy that securely holds an iPhone so your baby can play with it. It is Baby’s First iPhone Case. It is your baby’s gateway to the iPhone.
What’s most galling is the rattle. On each side of the case, the handles double as rattles. Shake it, and it makes the same ka-chink ka-chink sound that children have gravitated toward for millennia. Toddlers don’t really care about rattles. That’s the stuff of babies. The box says 6+ months. In other words, it says it’s OK to give a kid who can’t even handle solid food an iPhone, as long as it’s in this case.

I have a 2-year-old. Like all parents, I want her to be smart and healthy and well-adjusted. I want her to do normal kid things, that kids have always done. I want her to play outside and read books and develop relationships with her peers. I don’t really know how smartphones and tablets and all the other interactive screens fit into that. Worse, it seems like there is simply no way of knowing.
The American Academy of Pediatrics is unambiguous about time spent with screens. It says any at all is bad for children under a certain age. “Television and other entertainment media should be avoided for infants and children under age 2. A child’s brain develops rapidly during these first years, and young children learn best by interacting with people, not screens.”
I’ll be the first to admit seeing a baby play with an iPhone is cute. Adorable even. And, look, as the parent of a toddler, I get it. We made an effort to follow AAP guidelines and prevent her from getting any screen time at all before she was 2. But honestly? On long flights, we’ve loaded up Sesame Street on the iPad before takeoff. Parenting is hard. And sometimes it’s all you can do to just hang on. Screens are easy.
Handing a kid a smartphone is a surefire way to buy yourself a few minutes of peace and quiet — assuming they don’t bash the device on the kitchen floor or inadvertently send a nonsense text message to your boss. And that’s exactly what this toy from Fisher Price is designed to ensure. You can let a child play with your iPhone without fear that she’ll harm it, or even close the app you set up.
And, really, is there harm in an app? In the age of the educational app, those AAP guidelines seem, well, quaint. You don’t need a long-term double-blind study to prove an interactive smartphone app is different than a TV show. Which is good, because they don’t exist yet.
The first generation of toddlers that played with iPhones is not even out of elementary school. A child born the day the iPhone shipped would be kindergarten age today. We are all fumbling through this new world, and nobody knows what the long-term implications are.
All of this means parents are left to muddle through this. Hanna Rosin’s excellent piece in The Atlantic on the Touchscreen Generation describes the dilemma we face.


[A]s technology becomes ubiquitous in our lives, American parents are becoming more, not less, wary of what it might be doing to their children. Technological competence and sophistication have not, for parents, translated into comfort and ease. They have merely created yet another sphere that parents feel they have to navigate in exactly the right way. On the one hand, parents want their children to swim expertly in the digital stream that they will have to navigate all their lives; on the other hand, they fear that too much digital media, too early, will sink them. Parents end up treating tablets like precision surgical instruments, gadgets that might perform miracles for their child’s IQ and help him win some nifty robotics competition—but only if they are used just so. Otherwise, their child could end up one of those sad, pale creatures who can’t make eye contact and has an avatar for a girlfriend.

Rosin eventually concludes it’s all going to be OK. She lands the piece with the story of how she gave her son (who would seem to be 4 or so) unfettered access to an iPad, and how he grew tired of it, as he does with any other toy.
I can see that. I can relate to that. I can understand that. But I’m not sure I’m ready to cross that bridge with a baby.
Our kids are going to be faced with screens and interfaces and embedded video and multimedia all of their lives in ways that we cannot even imagine. When I consider the screens that were available to me as a 5-year-old, versus those that were available to me at 40, I am staggered by all the welcome and unwelcome ways video has pervaded my life.
I have no fear that my child will only be able to form relationships with avatars. Nor do I think that it’s imperative to dunk her in the digital stream from an early age in order that she may better negotiate this coming world of pervasive information. There’s some sort of weird balance we have to fumble our way into finding and nobody — not parents, not scientists, not anyone — knows yet quite where it is. But I am pretty sure it’s not inside a rattle.
Last year, we took our daughter to Hardly Strictly Bluegrass, a free concert in Golden Gate Park. We met a few other parents, who had toddlers of their own. Before the band started playing, one began throwing a tantrum. He wanted his iPod Touch, and so he got it. Then the Preservation Hall Jazz Band began to play, and all the children began to dance and laugh and play in the grass. Except for the one who sat on the blanket, staring at a screen, oblivious to all else.