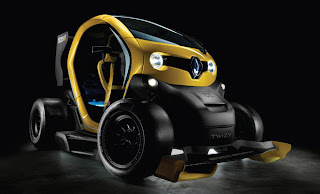 Of all the vehicles Renault could’ve chosen to highlight its Formula 1 technology, it picked the Twizy, a glorified electric go-kart with the racing pedigree of, well, an electric go-kart. Yet we want to drive it. Desperately. We are not too proud to admit this.The French automaker — which has won the F1 constructor’s and driver’s championships twice as a manufacturer and has provided engines to the likes of Red Bull Racing — inexplicably festooned the lowly Twizy with all
manner of F1 frippery, including a front splitter, side pods and rear wing. All of this stuff is about as useful as your appendix, but no matter. It’s nothing we haven’t seen on Honda Civics for years. Ramping the absurdity up to 11, Renault Sport added tires and wheels from its Formula 2 cars and fitted the interior with a single carbon fiber race bucket and the button-laden steering wheel of a Formula Renault 3.5 series racer.

So why would we possibly want to drive it? KERS.
By adding the kinetic energy recovery system currently used on F1 cars, Renault has increased the power of the Twizy six-fold.
The electric motor in the Twizy is, under normal circumstances, good for 17 horsepower, which is about what you get from a riding lawn mower. That clearly wasn’t enough to justify the addition of a rear wing, so the obviously over-caffeinated (too much Red Bull?) engineers at Renault used KERS to boost output to 97 ponies. In keeping with the F1 theme, you only get that extra juice for 13 seconds at a time. Use it wisely.
The result is a Twizy that can hit 60 mph in the same amount of time as the automaker’s quickest road machine – the Mégane Renaultsport 265 hot hatch – which clocks in around six seconds. Fast, but considering Renault doesn’t even give estimates on the standard Twizy’s acceleration times, it’s difficult to really compare. What we can compare is top speed. When the KERS is triggered, the motor spins up to 10,000 rpm to deliver a v-max of… wait for it… 68 mph. That’s up from a little over 50 mph in production guise.
As you’d expect, the Twizy Renaultsport F1 is strictly a concept that will be making the rounds at various auto events throughout the year, but if it happened to wander into the Wired parking lot, we’d gladly take it for a spin – at around 2 AM.