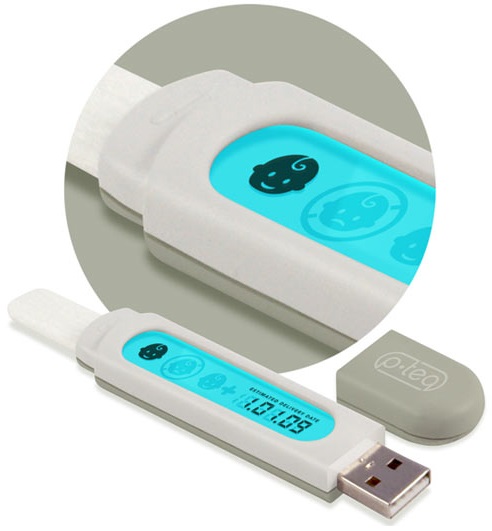 One line or two. Yes or no. Pregnancy tests are binary by their very nature. So when we found p-Teq's USB Pregnancy Test Kit that's chock full of extra scientific information, we knew we had to get this geeky goodness to our potentially spawning fans.
The process starts off like most pregnancy tests. You pee on a stick, specifically the absorbent test strip at one end. But everything's different after that first step. Remove the cap from the other end of the stick (cleverly provided to keep you from accidentally contaminating the wrong end) to reveal the USB
connector. Pop it in your computer. The power from your USB port starts the electrospray ionization process, creating a spectrograph of the various masses for your analysis. Get it? Your analysis? Urinalysis? *rimshot* Moving on.

You don't actually get to see the spectrograph yourself. The mass analysis happens inside the device. And p-Teq's device only analyzes for specific chemical makeups, so you don't have to worry about this thing busting you for that "poppy seed bagel" you had yesterday. The mass spectrometry software on the device comes with several sequenced hormones, including hCG (human Chorionic Gonadotropin), hCG-H (hyperglycosylated hCG - for detection before your first missed period), and LH (luteinizing hormone - for detection of your most fertile days). We like the fact that it does all three. After all, if you're not pregnant and you wanna be, you need to know if now's the time to be gettin' it on.

While most home tests can detect a level of 15-50 mIU/mL of hCG, the enhanced methodology of the USB Pregnancy Test Kit can detect 5-50 mIU/mL, and will show you the exact concentration via its friendly onscreen interface. In addition, the LCD display on the device itself will light up and show you the symbol of a baby, no baby, or multiples and your Estimated Delivery Date based on the concentration of hCG, hCG-H, and LH in your urine. So you can clear your calendar in advance.
After you're done reviewing your test results, just pop the device out of your computer and change the test strip. The display will remain lit for five minutes and then automatically power off. Note: We recommend the use of horizontal USB drives for this product to prevent accidental moisture transference.