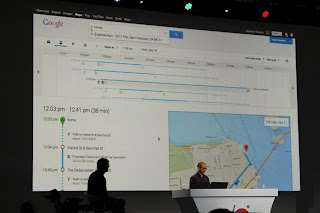 Google today announced a new version of its mobile Maps application and talked about the new things it's doing to fill out Google Maps. At the Google I/O conference Wednesday, Google outlined several improvements to both the desktop and mobile versions of its Maps app and a new user-contribution feature called Map Maker. Map Maker will allow users to add their own data, which Google may then incorporate.
The new version of Google Maps will allow users to zoom in on maps and see 3D renderings of buildings while searching for locations. Users will now be able to see whether their friends have rated places using a new five-point rating scale that will be introduced across all Google Maps incarnations. The partnership with Zagat ratings and reviews will persist into the new version alongside the new five-point ratings.

Google Offers will now be integrated within Maps, offering users discounts from within the app, but at launch it will only be integrated with partner brands. The new Maps will also use live coverage of "incidents from around the world" that will allow users to see news updates in context in real time. Dynamic rerouting in traffic view will help users avoid traffic snafus.


A new Explore feature within Maps will give users an interface to find things to do based on the general activity they're looking for (eating, drinking, sleeping). Explore can pull up nearby highly rated results sorted by category; for instance, within "Play," Maps lists several parks and museums and a section for "popular with tourists."
Brian McClendon, vice president of Maps, noted that Google Maps is composed of four layers of data: base maps, imagery, Street View, and local data. Geocoding photos has changed the mapping experience, McClendon said, and he briefly noted that users will be able to contribute to mapping data. He did not say explicitly how that will be accomplished, but Maps will now include photos inside listed locations like restaurants, which will presumably be user-provided.
Maps will get a design overhaul that removes the usual sidebar present on the Web interface, and all minor streets will now be highlighted. Directions are created on demand when the user chooses a location, and maps can automatically compare driving and public transit options. For public transit, Maps now includes a schedule viewer for train and bus arrival times. Portions of Google Earth have also been integrated into Maps so that users can navigate to famous landmarks and dynamically view 3D renders of them. Users can also tour the insides via user-uploaded photos. When zooming all the way out they can see the Earth in context (with clouds rendered in real time), moving through space with the sun and stars in their current, real-time positions.
Google Maps, which previously existed on iOS as an iPhone-only application, will now be available in iPad format as well. The new Google Maps can be previewed on the desktop today, with the full desktop and mobile versions arriving this summer.