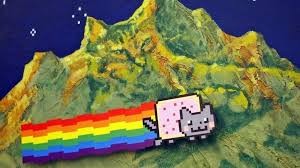 Warner Brothers is facing a federal lawsuit for using two feline-themed Internet memes in a video game without their creators' permission. The authors of "Keyboard Cat" and "Nyan Cat" have sued the media giant arguing that the game Scribblenauts, published by WB Games, infringes their copyrights and trademarks. The game's developer, 5th Cell, is also named in the lawsuit.
Keyboard Cat is a YouTube video uploaded in 2007.
It shows a man's cat supposedly playing music on a keyboard. Nyan Cat is featured in an extremely irritating video that was uploaded to YouTube in 2011. As the complaint describes it, Nyan Cat is "a character with a cat's face and a body resembling a horizontal breakfast bar with pink frosting sprinkled with light red dots" that "flies across the screen, leaving a stream of exhaust in the form of a bright rainbow in its wake."
Both videos went viral and racked up tens of millions of downloads. The creators of the memes have both registered for trademark protection. At some point, 5th Cell allegedly added the characters to Scribblenauts, a series of games for the Nintendo DS and other platforms.
The two cat meme creators teamed up to sue Warner Brothers and 5th Cell. "Defendants have used 'Nyan Cat' and 'Keyboard Cat,' even identifying them by name, to promote and market their games, all without plaintiffs' permission and without any compensation to plaintiffs," they charge.
Warner Brothers is charged with both copyright and trademark infringement. The case will be litigated in the Central District of California, which includes Hollywood. We contacted Warner Brothers for comment but have not received a response.
Update: Christopher Torres, one of the plaintiffs, created the original Nyan Cat animation. However, he did not set the animation to music and upload it to YouTube, as the original version of this story implied. That was done by another individual. The story has been updated accordingly.