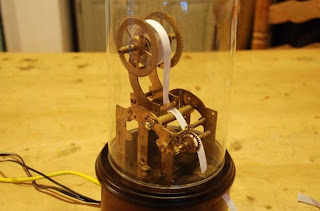 A web developer from Cumbria has built a modern version of a 19th Century ticker-tape machine which prints out tweets.The 'twittertape' device was built from scratch using second-hand parts from clocks and other sources, said creator Adam Vaughan.The wooden base hides a thermal printer and a micro-controller, he added.Share prices were traditionally distributed via telegraph lines and printed out on ticker-tape machines.They were invented in 1867 and some original machines are now considered to be high value antiques.


"One day I thought it would be nice to have one sat on your desk and started to think about what information it could produce. Twitter is perfect." Mr Vaughan spent three months assembling his version of the machine but admits a lot of that time was devoted to finding the right parts."I'm a web developer by trade so actually building stuff is quite new to me," he said. "I built it all from scratch after finding some examples online."
The device connects to a computer via an ethernet cable and pulls data from Mr Vaughan's Twitter account every 30 seconds.Any future versions could include a control panel so that the owner could programme the machine to print from a particular hashtag or from multiple accounts, he added, but his project has hit a snag.
"The main issue is that Twitter has updated its API and restricted access to third party developers," Mr Vaughan said.

Adam Vaughan says the popularity of his invention has surprised him. "There is a work-around but it has complicated things a bit."He admitted that he had been surprised by interest shown in his "twittertape" invention, especially from the steampunk community who share a passion for Victoriana and technology."I built it as a curiosity piece," said Mr Vaughan."Nowadays things are built for function and I feel something has been lost."When I first pitched the idea to friends and family they all hated it."