America Wanted to Put a Ring of Copper Around the Earth ! 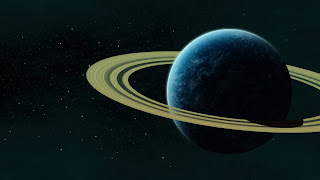 During the summer of 1963, Earth looked a tiny bit like Saturn. The same year that Martin Luther King, Jr. marched on Washington and Beatlemania was born, the United States launched half a billion whisker-thin copper wires into orbit in an attempt to install a ring around the Earth. It was called Project West Ford, and it’s a perfect, if odd, example of the Cold War paranoia and military mentality at work in America’s early space
program.The Air Force and Department of Defense envisioned the West Ford ring as the largest radio antenna in human history. Its goal was to protect the nation’s long-range communications in the event of an attack from the increasingly belligerent Soviet Union.
During the late 1950’s, long-range communications relied on undersea cables or over-the-horizon radio. These were robust, but not invulnerable. Should the Soviets have attacked an undersea telephone or telegraph cable, America would only have been able to rely on radio broadcasts to communicate overseas. But the fidelity of the ionosphere, the layer of the atmosphere that makes most long-range radio broadcasts possible, is at the mercy of the sun: It is routinely disrupted by solar storms. The U.S. military had identified a problem. A potential solution was born in 1958 at MIT’s Lincoln Labs, a research station on Hanscom Air Force Base northwest of Boston. Project Needles, as it was originally known, was Walter E. Morrow’s idea. He suggested that if Earth possessed a permanent radio reflector in the form of an orbiting ring of copper threads, America’s long-range communications would be immune from solar disturbances and out of reach of nefarious Soviet plots.
Each copper wire was about 1.8 centimeters in length. This was half the wavelength of the 8 GHz transmission signal beamed from Earth, effectively turning each filament into what is known as a dipole antenna. The antennas would boost long-range radio broadcasts without depending on the fickle ionosphere. Today it’s hard to imagine a time where filling space with millions of tiny metal projectiles was considered a good idea. But West Ford was spawned before men had set foot in space, when generals were in charge of NASA’s rockets, and most satellites and spacecraft hadn’t flown beyond the drafting table. The agency operated under a “Big Sky Theory.” Surely space is so big that the risks of anything crashing into a stray bit of space junk were miniscule compared to the threat of communism.
The project was renamed West Ford, for the neighboring town of Westford, Massachusetts. It wasn’t the first, or even the strangest plan to build a global radio reflector. In 1945, science fiction author Arthur C. Clarke suggested that Germany’s V2 rocket arsenal could be repurposed to deploy an array of antennas into geostationary orbit around the Earth. So prescient was Clarke’s vision, today’s communications satellites, residing at these fixed points above the planet, are said to reside in “Clarke Orbit”. Meanwhile, American scientists had been attempting to use our own moon as a communications relay, a feat that would finally be accomplished with 1946’s Project Diana. An even more audacious scheme was hatched in the early 1960s from a shiny Mylar egg known as Project Echo, which utilized a pair of microwave reflectors in the form of space-borne metallic balloons.As Project West Ford progressed through development, radio astronomers raised alarm at the ill effects this cloud of metal could have on their ability to survey the stars. Concerns were beginning to arise about the problem of space junk. But beneath these worries was an undercurrent of frustration that a space mission under the banner of national security was not subject to the same transparency as public efforts.
The Space Science Board of the National Academy of Sciences convened a series of classified discussions to address astronomers’ worries, and President Kennedy attempted a compromise in 1961. The White House ensured that West Ford’s needles would be placed in a low orbit, the wires would likely re-enter Earth’s atmosphere within two years, and no further tests would be conducted until the results of the first were fully evaluated. This partially appeased the international astronomy community, but still, no one could guarantee precisely what would happen to twenty kilograms of copper wire dispersed into orbit.

The West Ford dispersal system. (NASA)
On October 21, 1961, NASA launched the first batch of West Ford dipoles into space. A day later, this first payload had failed to deploy from the spacecraft, and its ultimate fate was never completely determined.
“U.S.A. Dirties Space” read a headline in the Soviet newspaper Pravda.
Ambassador Adlai Stevenson was forced to make a statement before the UN declaring that the U.S. would consult more closely with international scientists before attempting another launch. Many remained unsatisfied. Cambridge astronomer Fred Hoyle went so far as to accuse the U.S. of undertaking a military project under “a façade of respectability,” referring to West Ford as an “intellectual crime.”
On May 9, 1963, a second West Ford launch successfully dispersed its spindly cargo approximately 3,500 kilometers above the Earth, along an orbit that crossed the North and South Pole. Voice transmissions were successfully relayed between California and Massachusetts, and the technical aspects of the experiment were declared a success. As the dipole needles continued to disperse, the transmissions fell off considerably, although the experiment proved the strategy could work in principle.
Concern about the clandestine and military nature of West Ford continued following this second launch. On May 24 of that year, the  The Harvard Crimson quoted British radio astronomer Sir Bernard Lovell as saying, “The damage lies not with this experiment alone, but with the attitude of mind which makes it possible without international agreement and safeguards.”
Recent military operations in space had given the U.S. a reckless reputation, especially following 1962’s high-altitude nuclear test Starfish Prime. This famously bad idea dispersed radiation across the globe, spawning tropical auroras and delivering a debilitating electromagnetic pulse to Hawaiian cities.
The ultimate fate of the West Ford needles is also surrounded by a cloud of uncertainty. Because the copper wires were so light, project leaders assumed that they would re-enter the atmosphere within several years, pushed Earthward by solar wind. Most of the needles from the failed 1961 and successful 1963 launch likely met this fate. Many now lie beneath snow at the poles.
But not all the needles returned to Earth. Thanks to a design flaw, it’s possible that several hundred, perhaps thousands of clusters of clumped needles still reside in orbit around Earth, along with the spacecraft that carried them.
The copper needles were embedded in a naphthalene gel designed to evaporate quickly once it reached the vacuum of space, dispersing the needles in a thin cloud. But this design allowed metal-on-metal contact, which, in a vacuum, can weld fragments into larger clumps.
In 2001, the European Space Agency published a report that analyzed the fate of needle clusters from the two West Ford payloads. Unlike the lone needles, these chains and clumps have the potential to remain in orbit for several decades, and NORAD space debris databases list several dozen still aloft from the 1963 mission. But the ESA report suggests that, because the 1961 payload failed to disperse, thousands more clusters could have been deployed, and several may be too small to track.
Active communication satellites quickly made projects like West Ford obsolete, and no more needles were launched after 1963. Telstar, the first modern communications satellite, was launched in 1962, beaming television signals across the Atlantic for two hours a day.
In Earth’s catalog of space junk, West Ford’s bits of copper make up only a fraction of the total debris cloud that circles the Earth. But they surely have one of the strangest stories.
The scheme serves as yet another reminder that it was military might that brought the first space missions to bear, for better and worse. Like moon bases and men on Mars, it’s another long-lost dream born at a time when nothing was out of reach. Even putting a ring around the Earth